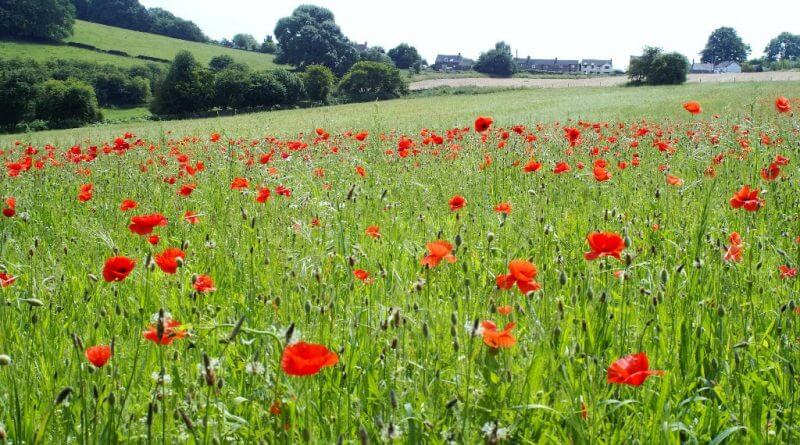 A new project is under way to create a wildflower meadow at Belper Lane End.

The aim of the project is to transform part of the field, which is sometimes known as Lane End Meadow, into a sustainable habitat for a wide range of invertebrates, mammals and birds.

Bounded by Whitewells Lane to the west and Belper Lane End to the south, in recent times the field has been farmed as one large arable unit of some 11 acres.  Now with the support of the DerwentWISE Landscape Partnership and funding from the Heritage Lottery Fund, it has been divided into two with a new fence and the more northerly section of around 4 acres has been cultivated and seeded with a specialist wildflower meadow mixture.

Repairs to the dry stone walls were carried out by volunteers from the Derbyshire Wildlife Trust and a new trough has been installed so that in due course the meadow can be grazed as part of the management regime. In order to enable access for local badgers, two special metal gates were included in the new fences.

Meadows are ecologically important as they provide spaces for wildlife to nest, gather food and in some cases shelter. They also support wildflowers that are vital to ensure that bees and other pollinating insects flourish.

Development plans include the installation of a hedge along the new field boundary which will be rich in native shrubs, and the restoration of an old spring or well which may in the past have provided drinking water for animals.

A recent survey found over 20 different flowers growing in the new meadow, including several which are common in arable fields: poppies, field pansies and shepherd’s purse and are a reminder of the field’s recent past. At the same there were welcome representatives of the new seed: yarrow, lady’s bedstraw, oxeye daisies, ribwort plantains, salad burnet and common sorrel.

It is expected to take several years for the wildflower meadow to become properly established but then it should provide an important refuge for local wildlife. Although there is no public access to the meadow, it can easily be viewed from Whitewells Lane.

One thought on “Meadow Returns To Belper Lane End”