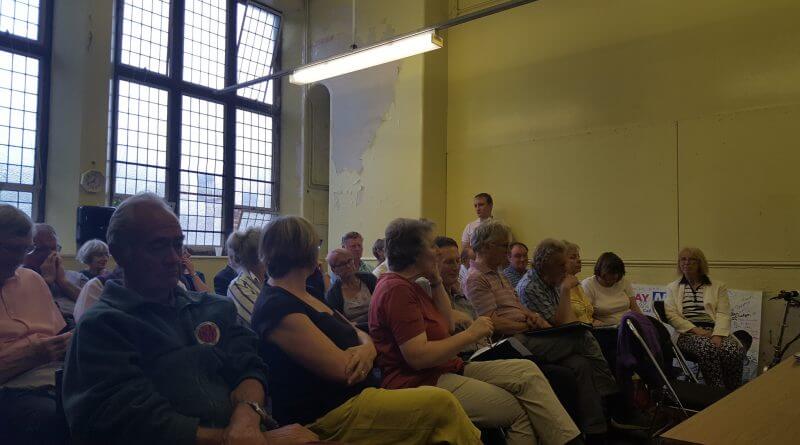 On Monday July 10 around 50 members of the public met at Strutts Community Centre to discuss the current situation of Babington Hospital in Belper.

The open meeting, organised by Save Our NHS Belper’s Keith Venables, posed a series of questions to those in attendance around issues facing the future of Babington Hospital.

Members of the audience, including staff and former patients, were asked to provide case studies of their experiences at the hospital.

A wider range of views were given on the services the hospital provides, possible closure, break up of staff teams, loss of the building to the community and impact of families caring for patients without sufficient support. Some discussion also focused on what other services could be offered if the Hospital and clinic were to remain open and a viable concern for the NHS in the area.

Gail Bollington, a nurse at Babington Hospital, said that beds would be lost if services were moved over to the Derwent Street site.

She said: “Going home isn’t always an option….we know that we are getting it right and we don’t want it to end.”

“At Babington we have a good team – ward manager, ward sister, staff nurses, healthcare assistants, house keepers, OT and Physio. This is what Belper people, and surrounding areas, need and this is what they deserve.”

The South Derbyshire Clinical Commissioning Group (SDCCG) Governing Body met on the 23rd of June and discussed their review of services at Babington Hospital.

It said: “There remains a more urgent need to make a decision about the future of the Babington Hospital site.”

The review discussed the ongoing likely arrangement of joined-up care in Belper, given that a new care facility is being built on the former Thorntons site on Derwent Street.

The SDCCG argue that options are limited and moving some care services from Babington to the new building could potentially be the only way forward. Other services at the hospital and clinic would also be moved to Ripley, Heanor and sites in the surrounding area.

Keith Venables said: “This is a really important issue. They are saying that to move what’s in Babington now into Derwent you would get the same. But you’re not.”

In the ‘Joined Up Care in Belper -The Future of Babington Hospital’ document presented at the SDCCG meeting last month it states:

“Assuming our proposal to close Babington Hospital is accepted, outpatient, clinics and diagnostic services and specialist rehabilitation services delivered from Babington Hospital and Belper Clinic will need to be re-provided in the proposed new development, in a flexible environment so it can be adapted to meet future needs and modern clinical practice.”

Though the review did not discuss future use of the site in depth, it did state that developments would be managed by NHS Property Services.

Ownership of the Babington Hospital site, including Belper Clinic, was transferred from the local health community to NHS Property Services Company (NHSPS) in April 2013 due to the requirements of the Health and Social Care Act 2012.

If the site is sold any money made will go back into the NHS’ capital services fund with the intention of being used elsewhere in the country where required.

A SDCCG spokesman said: “Senior managers and/or clinicians from the CCG have attended all previous NHS SOS meetings they’ve been invited to, but on this one occasion we didn’t because we’re awaiting a decision from NHS England regarding the proposed consultation.”

Currently the SDCCG have not started a consultation on the closure of Babington Hospital.

One thought on “Residents Vent Anger At Possible Hospital Closure”