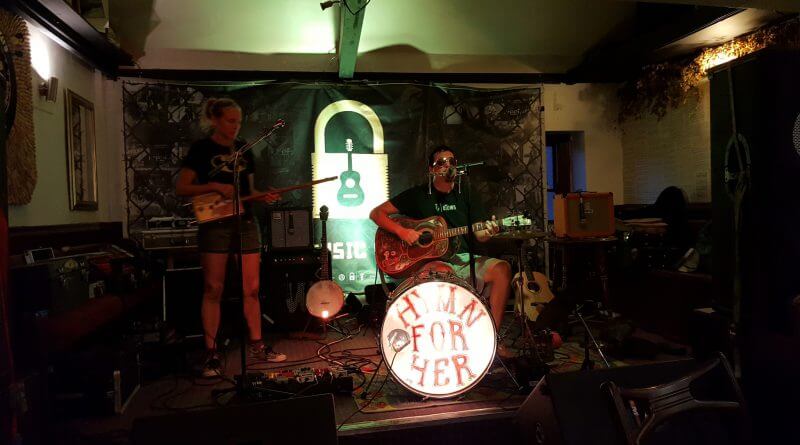 Hymn For Her are Lucy Tight and Wayne Waxing, a Tampa Bay twosome who rode out their hot and humid home and never turned back.

With a work ethic to match Frank Turner, Hymn for Her’s ‘Drive Til U Die’ is not just the title of their newest album – which they released last year – but also their raison d’être. Fresh from playing Glastonbury the band brought their Airstream trailer – and bona fide home – to the George and Dragon, Belper. They also stuck around an extra day to play a set at the Food Festival – and why not when you have a guaranteed audience of thousands on your doorstep.

Singing, playing drums, guitar, harmonica, banjo and occasionally banjo as a drum; multi-instrumentalist Wayne Waxing is a one man studio behind Tight and her box-guitar. With a pocket full of pedals the band get a lot of bang for their guitar buck and they can easily switch it up to suite different genres and styles. They seamlessly move between bluegrass, folk, pop, punk and rock with a slide guitar and foot-stomping bass drum the tether that keeps the sound flowing smoothly.

Their lyrics are like their homemade music videos; equal parts goofball, psychedelic, mournful, murderous road trip fantasies that play like one long behind the scenes diary of their never-ending journey around the world. It’s hard to tell which are real and which are fantasy, but a great band is 90% mythos and 10% truth.

This duo don’t so much as blow the doors off the barn, but rather nuke it, reverse over the debris and then salt the earth. Thunderous, fierce and most importantly fun; Hymn For Her are a band you must see and no doubt, given how much they tour, you will be able to when they wander our way again.