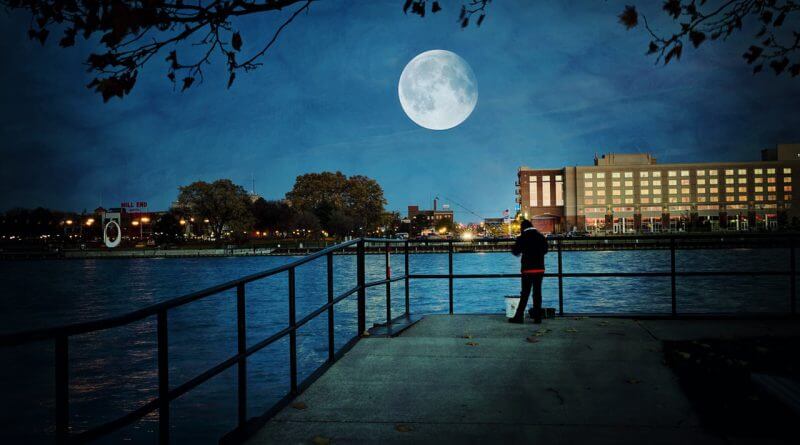 July’s night sky brings more chances to observe the planets Jupiter and Saturn. For early risers Venus continues to shine in the early morning sky, catch it 2 or 3 hours before dawn. The Moon is looking big – but this is just an illusion. The last nights in the month (the 28th – 31st) may be the best time to see some meteors.

At this time of the year the Moon often appears low in the sky. Because it stays closer to the horizon for longer, it can seem to be bigger than usual. However, this is just an optical illusion. The brain assumes that the Moon is bigger because it can compare it with known objects in the foreground – such as houses or trees. There is a good explanation of the illusion in the youtube video here:

To check this out for yourself, remove the foreground by looking at the Moon through a paper tube when it is close to the horizon and then look again later when it is higher in the sky – you will see that the Moon is the same size.

The Perseids produce impressive, fast moving meteors some leaving bright trails. Although the peak of the Perseids meteor shower will be in August it is worth starting observations earlier. This is because, this year, the nights with the highest rates of meteors (a predicted rate of between 60 – 80 meteors per hour) will coincide with a bright,waning gibbous Moon. Unfortunately the moonlight will obscure all but the brightest of meteors.

The Perseids will start to show activity from the 23rd of July, rates will be low at first, increasing as we get nearer to the peak nights in August. Although the meteor rate will be low in the last weeks of July (23rd – 31st), this could be the best time to look for Perseids as the Moon is in a crescent phase, sets earlier, and there will be less moonlight to obscure viewing. We should also take the lesson from last year when the peak nights were clouded out over Belper.

To view the Perseids look upwards on any clear night from the 23rd of July, from about 10.00pm onwards. Best views are always in the early hours of the morning, 2.00am onwards, when the radiant point of the shower is almost directly overhead. The last nights in July also includes the peak activity (5 – 15 per hour) of the minor meteor shower caused by the Delta – Aquarids and the Alpha Capricornids. So, in combination with the Perseids, these will be the best nights to see some meteors this month.

Venus continues to shine brightly, low in the sky, and rising in the east, 2 – 3 hours before dawn. On the 20th of July look out for its alignment with a thin crescent moon, and the bright, reddish, star Aldebaran.

Jupiter still dominates the sky in the south-west. After nightfall it is very bright in that part of the sky, and very easy to find. Binoculars will show its larger moons as small points of light. A small telescope will reveal it equatorial bands, its zones, and the four Galilean moons. Larger telescopes make it easier to view the giant storm that forms the Great Red Spot (GRS).

This is a good guide to what can be seen on Jupiter through a reasonable telescope: Sky And Telescope, Observing Jupiter.

Look out for Jupiter appearing close to the Moon on the night of 28th of July.

Saturn is very low in the evening sky. It rises in the south-east but never gets very high above the horizon. It is so low that if your horizon is obscured by houses or trees you may be unable to see it.  Try looking for it from 10.00pm onwards.

If you can find a clear horizon, or can spot Saturn, It is worth the effort of looking at it through a telescope. Even a small telescope will show Saturn’s ring system and, at the moment, these are fully open and at their best.

From the 10th of July to the 20th of July  the International Space Station is visible in the early hours of the morning in a time slot between midnight and 4.20am. There is, therefore, an opportunity to contrast its brightness with the planet Venus, particularly on the 19th of July, when ISS will make 2 passes of 6 minutes duration at 2.43am and 4.19am. Visit the website Spot the Station for the exact times and direction, and to keep up to date with possible sightings.

If you are prepared to make the journey to Chesterfield, the Chesterfield Barnett Observatory is open every Friday from 8.00pm onwards. They give visitors a warm welcome and you do not need to book your visit. Just pop over to see them and they will show you around and give you the opportunity to do some stargazing. They rely on the generosity of the local community to keep the Observatory running, so they ask for a small donation of £2.00 per visitor. More details can be found here: Chesterfield Barnet Observatory.

One thought on “Space Is The Place: The Night Sky Over Belper, July 2017”