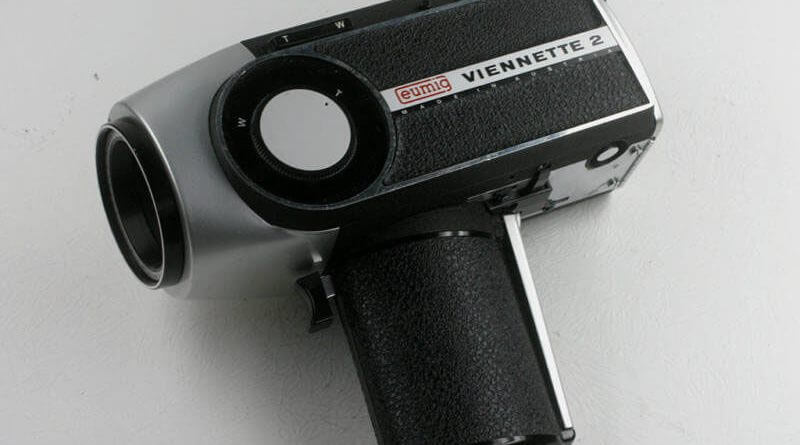 Regulars will know the score by now: I’m the Film Guy – the one who writes the mercifully occasional bits about Belper’s glorious contributions to world cinema. I’ve always been obsessed with film: I taught film theory and history for some years before moving into screenwriting. Before all of that, however – years earlier – I started at the very top.

I was a young film director.

In an age when everyone carries a high-def video camera in their pocket, it’s hard to explain the dubious pleasures of Super 8mm Cine. A fifty-foot cartridge of film cost, in the mid-Seventies, about £4 and gave, after processing (which was included in the price but took three agonising weeks of looking out for the Postman) a mighty 3 minutes and 20 seconds of grainy footage at 18 frames per second. Silent, of course.

I was given my first camera –  a Eumig Vienette 2 – by a neighbour. I was 10. As a filmgoer, I was an opinionated child. I knew what was wrong with every film I ever saw, and what would be needed to make it better. “Jason and the Argonauts” and “The Land That Time Forgot”, were exceptions. Two films that were so perfect, so flawless in every aspect of their execution, that I could not only see no way of improving them – I couldn’t really see much point in even making any more films, ever. The artform had finally been perfected.

Now I had my own camera. I would be able to make my own films.

With two friends – we’ll call them “Richard” and “Wayne” (mainly because their names were Richard and Wayne) – and an optimism not quite matched by resources or expertise, we set about our first production: “Zombies of Atlantis” (UK. 1975. 3m. Kodacolour).

Synopsis: An explorer, having travelled to the sunken continent of Atlantis through a secret underground tunnel (see map), is attacked by ferocious zombies before escaping in a handy diving bell closely resembling a tea chest.

Atlantis, portrayed convincingly by a combination of the river Ecclesbourne at Duffield and a Duffield back garden, was in the title for the simple reason that the very word “Atlantis” makes any film sound at least eight times better than it otherwise would be. Try it for yourself: “The Maltese Falcon – in Atlantis”. “Singin’ In The Rain In Atlantis”. (The one exception to the rule is “Hearts in Atlantis” – a film that actually has “Atlantis” in the title, yet is only one-eighth as good as it sounds…). “Zombies” were in the title because, well, why not?

Even as the Writer, Director, Editor and Director of Photography of this epic, I’m prepared now – with benefit of hindsight – to admit that it wasn’t a very good film.

A safer proposition than a ground-breaking Lost Continent / Undead Cannibals mashup was our next effort. “James Bond and the Secret Weapon” (UK. 1975. 3m. Kodacolour) was a straightforward action piece. Bond was portrayed by Richard who – unlike our other local 007 – brought a considerable veracity to the complex role by insisting on performing all of his own stunts. These included falling backwards from a garage roof onto a lawn, narrowly avoiding being caught in an exploding fireball and doing his own driving for the climactic car chase (actually, sitting in the front seat of his Dad’s ancient Volvo, releasing the handbrake  and rolling down a sloping driveway).

“James Bond and the Secret Weapon” was a more assured piece of filmmaking (we’d learnt to use a tripod by then), but it still lacked the epic sweep – the visceral thrill – of pure cinema…

The last of our films was destined to address this issue comprehensively: “Hell Is For The Brave” (UK. 1976. 7m. Kodacolour) was a gritty epic of Men At War.

Locations were an issue, but – as ever – Belper came up trumps. The sewage works, cunningly dressed (to the consternation of a nearby worker we hung up a homemade swastika over the “Severn Trent Water Board” sign) became our rocket plant. Cunning use of a miniature tank (courtesy of Airfix) added a sense of danger. The simple, yet effective, cinematic technique of an actor wearing our only army helmet, running past the camera, and passing the helmet to another who would then run through the shot and pass the helmet to the next person, and so on, gave the impression of a large garrison. The liberal use of firework bangers (not the kind of bangers one sees today – 1970’s bangers would take your arm off) created Battle Hell (and saw off our Airfix tank).

Aside from anything else, our war epic was like a worst case scenario for “don’t try this at home.” Richard – who I’m sure wouldn’t mind my referring to as “not quite right” – actually topped his “falling off garage roof” stunt in the Bond film with “falling off bridge outside sewage works into river.”

“Hell Is For The Brave” was the acme of our filmmaking careers. As good as it was ever going to get. In fact, I seem to remember that just about everyone who saw it said “you’re never going to get any better, are you?” or something like that.

We decided to quit while we were ahead and sit back while we watched our legend grow.

Perhaps the British Film Institute will add them to their annual Lost Classics list.