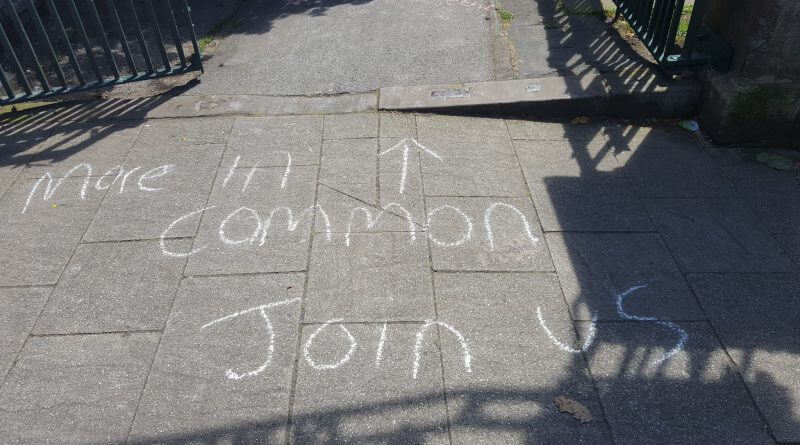 Building on the memorial event that happened last year shortly after the incident; Jen Pringle, Ian Pringle and Rowan Beton gave up their time to facilitate the picnic.

The Great Get Together is inspired by Jo Cox, who was tragically killed on the 16th of June last year. The organisers believe there is a groundswell of people who reject divisive politics and want to bring their communities together.

Over the weekend it is estimated that 120,000 similar events will be taking place throughout the country to celebrate the life of the murdered MP Jo Cox and promote togetherness.

Bernadette Copeland, who was visiting the Memorial Gardens, said: “It think it’s beautiful. I found it very moving. Unexpectantly so.”

In typically British fashion there were strawberries, cake and sandwiches being shared amongst the picnic blankets by families. Music was played, toys and games were available for children and a visitors book was handed around to those in attendance which will later be sent to Jo’s family and friends.

Rowan Beton, speaking about the afternoon, said: “I think it has been fantastic event with people from all walks of life coming and it has done exactly what we wanted it to do. To bring people together and honour what Jo Cox stood for.”

Derbyshire Toy Libraries offered their huge collection of toys for the afternoon for free and aided with insurance cover for the event. Belper Town Council also assisted in making the event happen.

Co-organiser Jen Pringle said: “Last year, after Jo Cox’s murder, in Belper we held a memorial to celebrate her life and I was moved to do that because my sister was very close friends with her. I also met her and she was an inspiring woman and was one of those people that leave a lasting impression. The way that people have wanted to carry on her message that we have got more common. She was very focused on a world-wide community, but also a very local level community that tackles isolation and loneliness.

Her husband Brendan Cox wanted her to be remembered in a positive way on the anniversary of her death and so this event was started nationally.

We tried to keep it very low key, just a picnic, not a massive event with a stage, just people talking to people. Trying to bring in people that would not necessarily usually come. We are trying to build bridges in the Belper community.”

For more information of events happening in the area over the weekend click here.