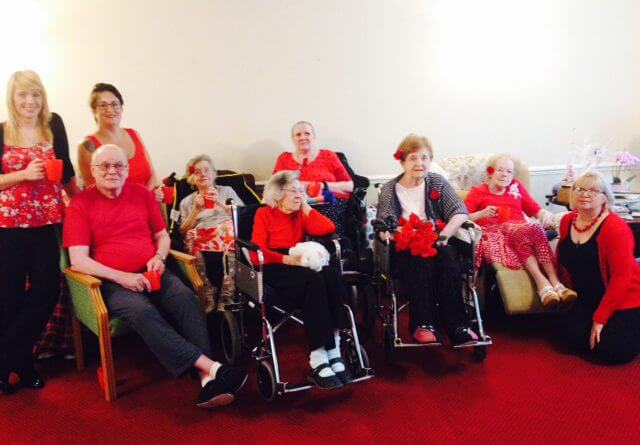 Staff and residents at a care home in Belper donned red to raise awareness of heart disease.

The event, on Friday, raised funds for the British Heart Foundation and marked a month of fundraising at Spencer Grove for three charities.

Residents at the Milford Care owned home will be taking part in cupcake day on June 15 for the Alzheimer’s Society, where they will make cakes to be sold to visiting relatives. They will then enjoy a cup of tea and a slice of cake for the ‘blooming great tea party’ on June 22nd to raise funds for Marie Curie.

Later in the year they will take part in a memory walk for Alzheimer’s Society at Wollaton park. This will be the second time they have taken part in the event.

Naomi Davies, Administration Manager at Spencer Grove on Springwood Gardens, said: “It’s about supporting the home and relatives of people with heart disease and Alzheimer’s.

“The residents didn’t have to dress all in red. Some wore a red feather in their hair or red lipstick. We left collection boxes out for people to donate. We have held a red lipstick day before where even the male staff took part.”

The home has already raised hundreds of pounds for charity and also has a residents’ fund to pay for trips and entertainment.

The British Heart Foundation are the nation’s largest independent funder of cardiovascular research. Their pioneering research has helped to transform the lives of people living with heart and circulatory conditions