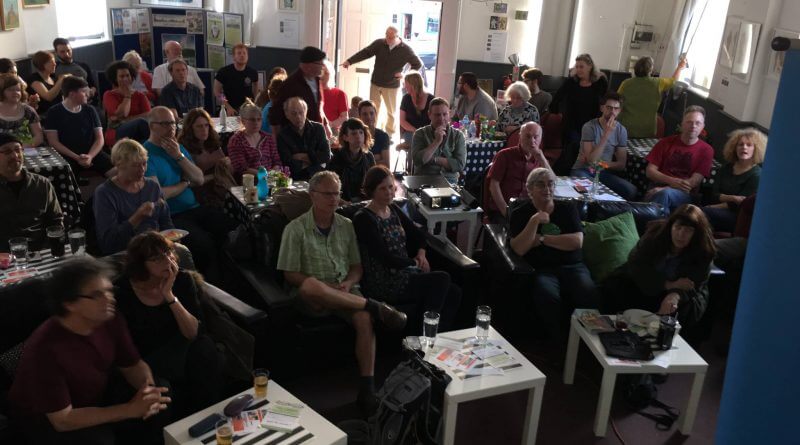 Trump. Brexit. Cyber warfare. Automated Jobs. The world is in crisis. It’s a troubling time, and not just for environmentalists but for humanity as a whole.

Climate change has begun to affect the planet in ways we are just beginning to understand. Striking newspaper articles about islands of plastic and plastic on islands, the bleaching of the coral reef, the Keystone XL pipeline, delays on air pollution targets and fracking are just the tip of a melting iceberg.
What comes next is uncertain.

What we do know is that these big and long-term problems often feel unsolvable and overwhelming. When faced with such unsurmountable, often global issues we as humans are prone to turn to apathy, anger or despair. But what about hope? What about change? What about solutions?
Well tonight’s film, presented by Transition Belper at No28, was a documentary that sought to buck the trend of gloomy environmentalism. Professional, concise, upbeat and practical, the documentary is uncompromising about the challenge we face without bordering on the evangelical.

Produced by activist and writer Cyril Dion and actress / director Mélanie Laurent (Inglourious Basterds, Now You See Me), the globetrotting film tells the story of their pursuit for solutions to the biggest of dilemmas facing human kind. Split into five chapters that cover Agriculture, Energy, Economy, Democracy and Education the film darts effortlessly around the world looking at examples of best practise and showing, often simple, ways we can make a significant difference.

Having already been viewed by over 1.5 million people in France alone, and winner of Best Documentary at the Cesar Awards (the French Oscars), “Tomorrow” has had a huge impact since it launched. Despite this success the film struggled for a general release in the UK and so the Transition Network secured a community-led distribution across the country. No surprise as Transition founder Rob Hopkins features heavily in the film and his community enterprises lay much of the groundwork for the general ethos of the film.

Visually the super 8 style cutaways and slightly saccharine tracks provided by Fredrika Stahl may lean harder on car commercial aesthetic than hard-edged documentary; however, this serves only to make the film more accessible to newcomers. Don’t be mistaken though, for this is a film that will appeal to novices and seasoned environmentalists in equal measure. You’d be hard pushed to find a single person in the room who wasn’t inspired to think locally about what a difference they can make and it is here the documentary ultimately succeeds.