For the last year the Mayor of Belper has been Kirk Ireton (Ashbourne) resident, Gary Spendlove.  Mr. Spendlove’s term has come to an end and we get a new mayor.  As usual, the last Deputy Mayor is our new Mayor.

Belper Town Council have chosen and appointed Town Councillor and former Deputy Mayor Peter Hurst as Mayor of Belper for the next year. Councillor Hurst moved to Belper in 1991 (although also owns property in Alfreton) when he moved here whilst working as a Regional Sales Manager for Deb. His work history includes Amberol, Machine Mart, Royal Mail, the Red Cross and East Midlands Reserves Forces and Cadet Association.

Mr. Hurst is a volunteer for Soldiers, Sailors and Airmen Family Association (SSAFA) and he is the treasurer for its Amber Valley Division. He spent twenty years as an officer in the Army Cadet Force.

Following his retirement Mr. Hurst studied Commercial Photography at the University of Derby and has now set up a photography business in Belper with students from Derby University.

He was elected to the Council in May 2015. He is the Council’s representative on the board of trustees of The Drop Inn. He has been a member of the Finance Working Party and Staff Working Party within Belper Town Council.

Belper Town Council says that: Cllr Hurst is looking forward to working with the community in his municipal year. As an ex judge for London in Bloom he has an interest in Belper in Bloom and promoting tourism for the town. His particular focus will be promoting the development of young people.

The Town Council has also chosen and appointed Councillor Tim Sutton as Deputy Mayor (and possibly future 2018-2019 Mayor). Mr. Sutton lives in Makeney, near Milford, and is a Councillor for the North Ward. He is an IT consultant. Mr. Sutton has been part of the Finance Working Party and the IT Committee as a Belper Town Councillor. 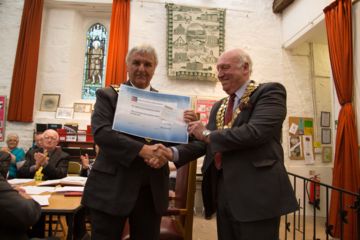 Every Mayor supports and fundraises for a local charity.  Dan Booth’s charity was the Treetops Hospice, Gary Spendlove’s was the Herbert Strutt Charity Trust and there is a fair chance that Peter Hurst’s charity will be The Drop Inn.

Outgoing Mayor Gary Spendlove ended his year as Mayor by handing over a cheque for £2,210 to the Herbert Strutt Charity.

The Herbert Strutt Charity Trust was established in 1986 and is administered jointly by Amber Valley Borough Council and Belper Town Council, which means that the two councils get to decide how this money is spent.

The council informs us that the money is made up from the proceeds of sale of New Road Depot in Belper, Gibfield Lane Baths, Belper and other unnamed minor sales.

The charity awards funds to benefit residents of the area served by Belper Town Council (including Milford), in the following ways:

Councillor Spendlove said it was a pleasure to have held the position as Mayor and that he enjoyed the year immensely.

One thought on “New Mayor for Belper”