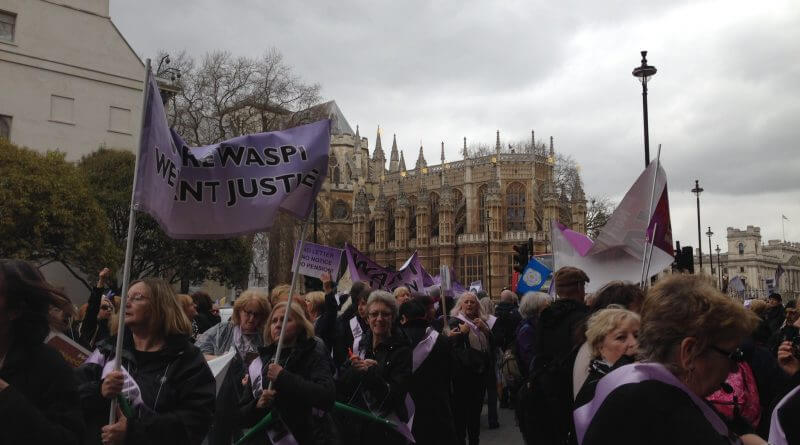 In the run up to this General Election, across the country, almost 3.5 Million women born in the 1950s now have the opportunity to vote for their futures and for their future financial security.

These women are represented by a group called WASPI – Women Against State Pension Inequality (or as many of us prefer, ‘Injustice’). WASPI are not affiliated to any one Political Party. We are asking whichever party is in power to make a Fair Transitional State Pension Arrangement for 1950s born women.

We have no grievance with our State Pension being brought into line with men’s, but rather with the way in which it was done. Changes were implemented by the 1995 and 2011 Pension Acts, but no woman was written to until 2012, meaning that many were only months away from anticipated retirement at age 60 when they learnt they would need to work for up to a further 6 years. This news has had a devastating effect on the lives of many of these women.

Throughout our lives many of us have married, raised a family and run a home, whilst also holding down a part-time or, in some cases even, a full time job. As a part-time worker we did not qualify for a full National Insurance Stamp unless we could manage to make up the shortfall and many were not aware of the effects this would have on income in later life.

The ‘New Flat Rate State Pension’ does little to improve matters as due to Half Stamp payments and the period when we were advised to ‘opt out’ of SERPS – State Earnings Related Pension Scheme, if we were members of an occupational pension scheme, women (and men) are now finding they are due to receive less than the full £155.65 per week that is promised.

The Government requires 35 years Full National Insurance contributions before a person can qualify for a State Pension. Many of these women, born in the 1950s, have in excess of 40 or even 45 year’s contributions and yet, still they cannot draw a State Pension until they are age 65 – 66.

Insufficient suitable job vacancies, inadequate support from the Job Centres and increasing pressures to undertake roles that are not suitable for older women is driving us to take desperate actions. Women are selling their possessions, selling their homes, when on the horizon come threats of additional care costs in our senior years and we have no prospect of being able to afford them. Not now, never mind in 5 years, or even 10 years’ time.

We are encouraged, as Grandmas, Nannies, Nannas, Mamas and Grannies, as Sisters, Aunts, Mums and Mothers, to keep working to support ourselves in our old age. Yet, there are so many of us who have young people in our families who cannot find work and are having to fall back on the benefits system to get by. How does it not make sense for us to step down and for these young people to be allowed to step forward and begin their lives and gain self-worth and pride in themselves? Give us their ESA and their JSA until we reach the new State Pension Age and let them begin their lives.

At the end of the 19th Century and the early part of the 20th Century (the Century in which WASPI Women grew up) the Suffragettes fought hard and even lost their lives to win the right for women to have a vote; for women to have a say in how their country is run and to be able to decide for themselves who should run the country.

Now in the 21st Century, women across Britain are choosing to forego that right and failing to use their vote and because of this Britain finds itself in a very dark place.

Women of Britain you have a vote, your predecessors died for you to have this vote. Please vote on June 8th.  Use that which is your right and use that right wisely.

We are not telling you who you should vote for, that is your personal choice, but please VOTE!

For further information about WASPI please go to their www.waspi.co.uk where you will find details of your nearest group under Local Groups.