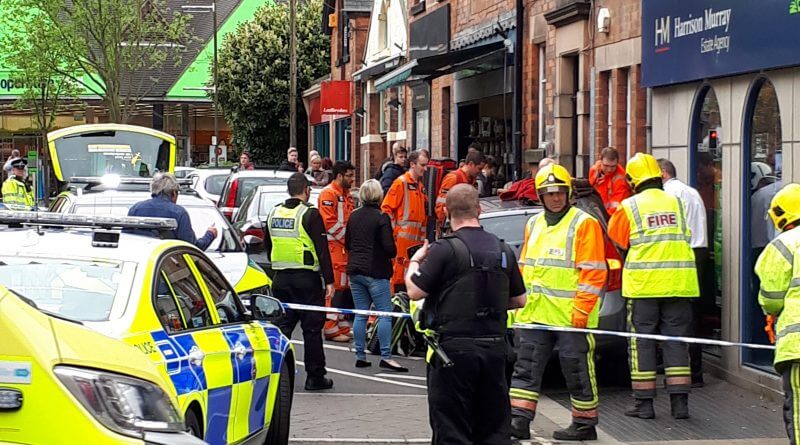 Shortly before 3pm on Friday 21st April a car was seen “speeding round the corner and then there was a bang” on the turn of King Street into Strutt Street.  The car mounted the pavement outside Nottingham Building Society and hit pedestrians. There are no brake marks on the road to indicate high speed. The car did not hit the building.

Police arrived quickly on the scene and cordoned off the area with crime scene tape as two ambulances and two fire engines from Duffield and Alfreton arrived.   The Air Ambulance was called and arrived, left and returned, but was not required in the end.

One female pedestrian was trapped under the car, a grey Nissan Note. The Fire Service worked for over an hour to free her.  She was then taken to hospital by ambulance.

The driver of the car was an elderly woman who, once the car was moved, climbed out of the car and was walking, apparently unharmed, but she was advised to go to hospital too. Friends or relatives arrrived to remove her undamaged car.  The driver was not arrested and left with car.

Police collected a wheelchair from the scene, believed to belong to the injured pedestrian.

All emergency services left the scene at 4:20pm. Both roads were closed from 3pm to 4:15pm and public transport had to reroute.

A great many Belper residents lined King Street watching to see what was happening. Many stories are circulating about the details of the accident.  This is what we know so far from the scene of the accident, we will update you when we find out more.