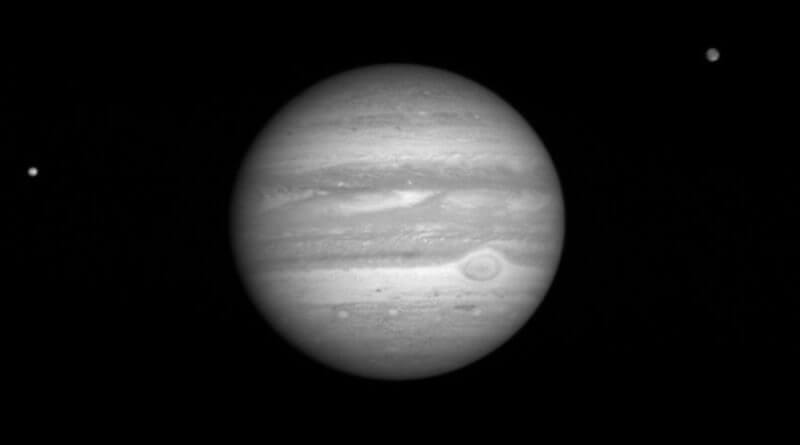 April’s night sky is dominated by the bright planet Jupiter. There are still opportunities to view Mercury at the beginning of the month – but be quick. Mars still shines faintly red in the west – but towards the end of the month it will no longer be on show. Venus is now a morning object (catch it before sunrise) and Saturn is bright in the early morning sky. Between the 16th and the 25th of April look out for the Lyrid Meteors. (Note all times are in BST)

The Lyrid Meteor shower peaks on the 22nd of April.  Best viewing conditions will be between midnight and 3.00am in the early morning hours of the 22nd as there is no Moon during those hours. The Lyrid meteors peak at around 10 per hour, and this when viewing under ideal conditions. You may see one or two. Look up and towards the northeast to catch them. The Lyrids are fast moving and occasionally leave glowing trails.

Venus is now a morning object. It is still very bright, low in the sky, and rises in the east one hour before sunrise. It currently appears as a waxing crescent in a telescope – but it may be difficult to view because it is so low in the sky at the moment.

Jupiter is now the dominant planet in the night sky, shining brightly in the south. It is best seen from the middle of the night (10.00pm onwards) when it is higher in the sky. Technically it will be at its brightest on the 7th of April. Look out for it on the 10th when it will be close to the Moon. The bright star below Jupiter is Spica which sits in the constellation of Virgo.

Jupiter is a very good object to view in a telescope. A small telescope will show its bands and the larger moons: Io, Ganymede, Europa and Callisto. It is interesting to note that Ganymede is the ninth largest object in the solar system and is larger than Mercury. If you get the opportunity to view Jupiter on successive nights you will see that its moons change position as they orbit around the planet.

Mars is still visible but it will be lost in the twilight towards the end of the month. It can be seen in the west and binoculars will reveal it as a small red dot. Try looking for it around the 20th of April when it will be just below the open star cluster of the Pleiades. In the later part of the month you can contrast fading Mars with the bright red star Aldebaran as both objects lie in the same part of the sky. Look west, about an hour after sunset.

Saturn appears as a bright “star” in the southeast, rising around 1.00am and lying in the constellation of Sagittarius. A couple of hours before dawn the planet will be high enough in the sky to observe. Saturn’s rings are at their most open at the moment. If you can it is worth getting up early to observe them. You will need a telescope to see the rings.

It is still possible to spot Mercury. Look towards the west, about 45 minutes after sunset, and it will be low in the sky, just above the horizon. Mercury is dimming, by the 8th of April it will less bright than at the beginning of the of the month and will be very low in the sky. It will be much harder to spot then, so try and look for it as soon as you can.

Warning: Do not use a telescope or binoculars to view Mercury until after sunset. If you catch the Sun by mistake you will risk serious eye damage.

Mizar and Alcor – A Double Star in the Plough

In April the constellation of the Plough is high in the sky; look towards the northeast. If you look closely at the star, Mizar, located on the midpoint of the “handle” of the Plough you may see a fainter star alongside it, Alcor.

For some this “naked eye” double star is more clearly resolved in binoculars. Double stars like this can either be stars that appear to be linked because of their apparent closeness in the sky or they can be actually linked in the sense that the stars form part of binary star system and are gravitationally bound. Mizar and Alcor are part of a binary star system.

A telescope will show that Mizar is also a double star in its own right. It is now known that Mizar actually consists of four stars and Alcor of two stars. So altogether the two points of light we know as Mizar and Alcor  actually form a binary star system, consisting of a total of six stars which are all gravitationally bound to each other.

This is how to find Mizar and Alcor

The International Space Station is now visible in the evening in a time slot between 8.15pm and 10.30pm. On some nights you will be able to see it twice, separated by about 85 minutes. Its fly-past generally takes a couple of minutes. Check Spot the Station for the exact times of its appearance and trajectory.

Their next introduction to Astronomy evening will be on Friday the 21st of April at the Friends Meeting House, St Helen’s Street, Derby, 7.30pm. The subject for the evening is “Back Garden Astrophotography”.