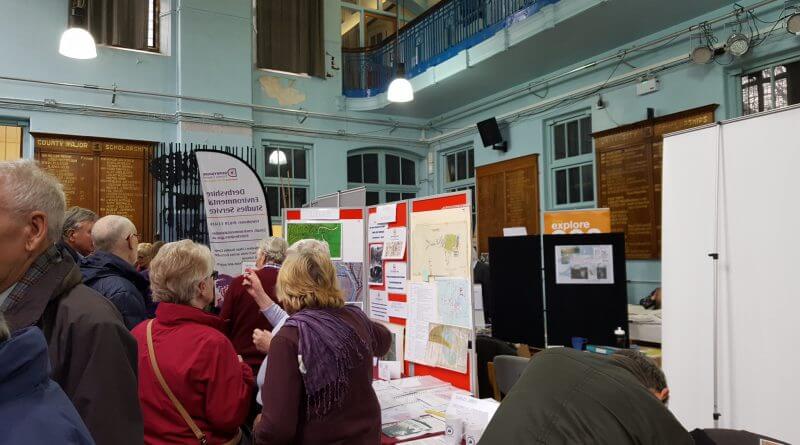 Hundreds of visitors attended the 15th Anniversary of the Derwent Valley Mills World Heritage Site at the Strutts Centre on Derby Road.

On Saturday, the 15th of March, visitors came to celebrate the event and experience over 40 different organisations manning stalls and displays with information and events connected to the heritage site.

The free event for all ages saw people participate in guided walks, half hour talks, historical dress, craft activities and presentations. Numerous local groups such as Protect Belper, the Neighbourhood Plan, Belper Tea Rooms with their ‘Buy A Brick’ campaign and the Belper Historical Society were joined by groups from up and down the valley.

Adrian Falmer, Heritage Co-ordinator for DVMWHS said: “It’s been an amazing day, we’ve had an astonishing amount of people who have turned out to celebrate the World Heritage Site. It shows the level of local interest in the heritage of the whole of the Derwent Valley.”

Pauline Latham, MP for Mid-Derbyshire, said: “It’s fantastic this afternoon, it shows that there is real community feeling and that the Derwent Valley Mills Heritage Site is going from strength to strength with more and more associations trying to associate with it.”

The Derwent Valley World Heritage Site is often described as the place that gave birth to the modern factory system. Central to the industrial revolution of the 18th and early 19th century the site stretches for 15 miles from Matlock Bath to Derby.

It features historic industrial mill complexes, workers accommodations, pioneering hydroelectric schemes, canals, railways and museums, all of which draw thousands of visitors to the region throughout the year.

Councillor Ellie Wilcox, Chair of the World Heritage Partnership, said: “I think it’s been really successful. The volume of people that have visited today and the feedback that we have overheard has been really positive and I think that there has been a real buzz in the centre…our ambition is to get more people to understand about their heritage and why it is so significant.”

Over the past decade considerable investment has seen major developments at the Cromford Canal and Mill, the Darley Abbey Complex and Derby Silk Mill, with many areas along the valley now brought back to their former glory or in the process of being restored.

Adrian Falmer, speaking on the future of the site as a whole, was optimistic. “There’s still a lot to do within the World Heritage Site, obviously there are some buildings that we are very concerned about and we want to be working on getting them up to scratch. There are parts of the World Heritage Site that aren’t of a global standing yet, but they will be we will get there we are on the right path.”

Despite huge investment throughout the Derwent Valley World Heritage Site there appears to be noticeable challenges ahead for Belper, particularly with the North Mill building deteriorating and in need of significant repair.

Latham, speaking on the Belper Mills, stated: “I would like to see the mills done up and being used properly. I think that it is letting the whole area down. If we could get the same sort of funding they have had into Belper, just think what a difference it would make to the mills.”

“The mills need money spent on it. It’s a huge project, it needs millions spending on it and I think it will be difficult to find the funding, but that doesn’t mean we shouldn’t try.”

Cllr Wilcox said: “I think that this World Heritage Site lends itself to those challenges, part of its inscription is about how man’s influence changed the valley. There is an issue around conservation, it needs to be planned very carefully.”