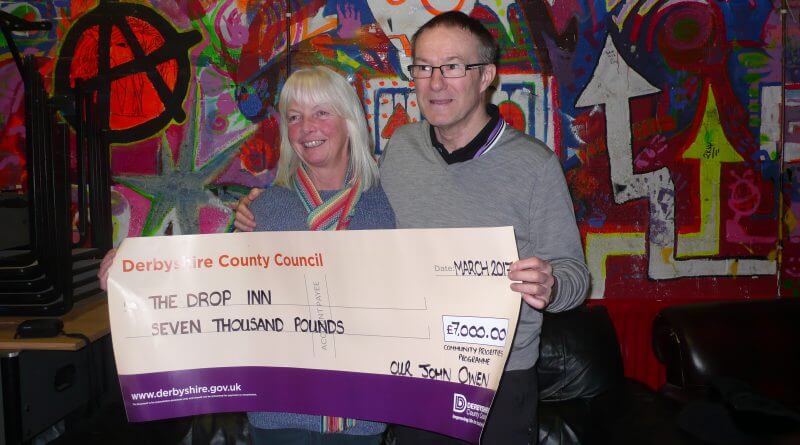 Cllr John Owen met founder and director of the Drop Inn Andrea Fox MBE to present her with a cheque for £7000 as part of the Community Priorities Programme.

The Community Priorities Programme was set up to support local communities, tackle inequalities and help residents to build a strong future.

The Drop Inn was chosen by Belper Councillor John Owen to support the development of its volunteering programme so that it is more sustainable and allows the organisation to engage with a broader range of regular volunteers. They want to develop a bespoke volunteering scheme and recruit six core volunteers and six ‘bank’ volunteers.

People will be trained to be able to deal with a range of behaviours.

Councillors representing areas already identified as having a greater need were invited to apply for funding for projects which would benefit the most from financial support.

The £2.3m being used by the fund is one-off money from the Derbyshire County Council’s general reserve fund. All of the projects chosen had to  meet strict criteria.

Speaking about CCP, John Owen praised the work done at the Drop Inn. He said: “It was about finding something suitable and sustainable. We are confident that the Drop Inn, because it has got such a good reputation and record, will be able to fit that criteria.”

“It was important for me to make sure that we had a group that could manage the funding. They will be doing things like supporting volunteers to get to the Drop-Inn centre, allowing for 12 individuals to gain first aid training and assisting 4 individuals to gain safeguarding training.

The independently run centre caters for young people aged between 12 to 18 – offering them support, entertainment and workshops that run throughout the year. The project was established 17 years ago with the aim of creating a place that young people could meet and call their own.

Andrea Fox spoke about encouraging and assisting volunteers to get to and from the premises, she said: “we have got a lot of people that are interested that are from out of the area and if they are not working and they are volunteering here it’s got to come out of their own pocket.”

“It’s asking too much of them really, so the funding will go towards that and to getting volunteers trained up as well in the right areas.”

Andrea highlighted the difficulties of securing funding, particularly the time it can take to complete applications whilst working as a full time volunteer and worker at the Drop Inn. It is hoped that with an increase in volunteers, additional time will be freed up to secure more funding.

To find out more about the work done at the Drop Inn, visit their site here.