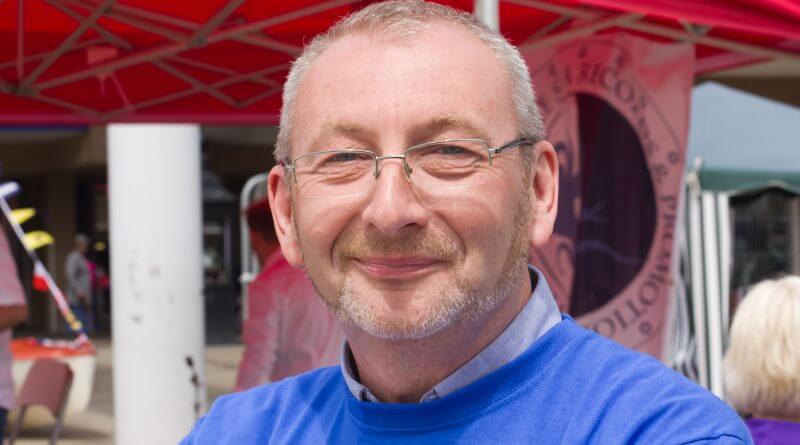 An obituary is generally where you talk about someone you know including details of their varied life and career from start to the, unfair and untimely in this case, finish. But how could I. Not only have I not known Andy for that long, maybe 6 years, but how could anyone understand the true extent of what Andy Potter achieved and involved himself in.

At the time of writing I don’t even know what has affected me more and why, the illness and all too quick passing of a long term supporter of the Arts underdog, the complete disregard for a wonderful human being that life has shown to a friend or the way he faced death with a courage that shrugged its shoulders and faced it down.

I can’t remember the beginning of my friendship with Andy, it may have been in a studio at Radio Derby where he, for the 1st of many times, displayed the open, empathetic and endearing approach that he takes to his interviews, possibly the reason why he got so much out of his interviewees with what appeared to be so little effort.

It also probably wasn’t the day of the 1st festival he came to though I’d like to think of it as that. Sitting on the benches under the trees opposite the Guildhall Theatre, a lone figure walked slowly from Quad towards me across the entire length of the market place and without breaking stride or sentence he arrived in front of me, said good morning Matt, and with that I was live on the air.

At the recent filming where numerous organisations and individuals came together to thank Andy, I was worried about the sentiment of what we were doing and concerned some of the talk might be in the past tense which at that point he very much wasn’t. But before I had a chance to utter some well meaning but awkward instructions the first people arrived and the whole air was one of gratitude and celebration. Fun times and genuine positive respect for a life well lived and deserved. The shared adulation in the room from everyone, including some of whom had never met before, made the whole evening flow freely and seamlessly just like it was one of his shows.

He loved the film, I was relieved, I was worried about how you could say thank you for so much in 4 minutes broken down into 10 second sections. He cried, I try to tell him it was nothing but I’m sure he didn’t hear that, he was deep in thought, in some of the those memories brought back by the beautiful tributes contained in the video.

At the hospital the condition was taking hold of him but the fire and the passion within was no different. He talked of the Arts in Derbyshire, the need for support from local radio amongst many others, that fight he’d had all his career and the one we all must now have on his and our own behalf.

At times like this the talk is always of making a positive impact, of helping others, and leaving the world a little better than you found it. A little better?! He smashed that one out of the park and all across his beloved Derbyshire.

One thought on “Remembering Andy Potter”