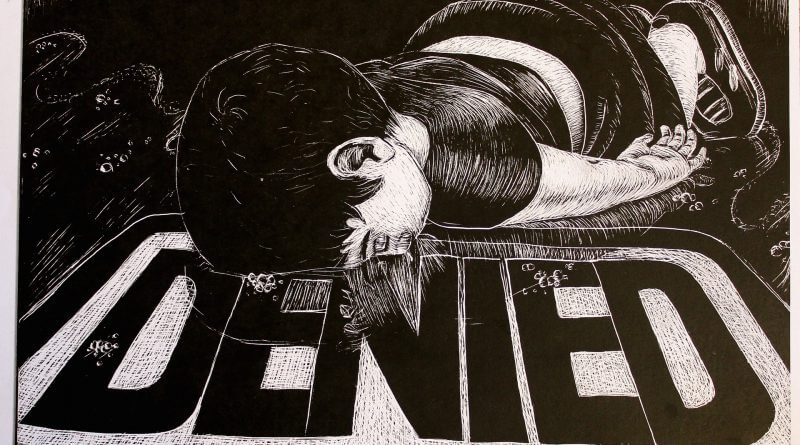 The British government recently reneged on its promise to take in 3000 unaccompanied child refugees from Syria and stopped the process (Dubs scheme) after taking approximately 350 refugee children.  In debate in the House of Commons on Thursday 23rd February, Mid-Derbyshire MP Pauline Latham spoke on the matter to say that the Syrian refugees have a comfortable life in Jordanian camps and that if Greek camps are letting people down then it is up to Greece to sort that out as Britain has thrown over two billion pounds at the problem and that ought to be enough.

Her speech and Chris Law’s response can be seen here on Parliament TV. The link should take you straight to the relevant section of the day long general meeting.

Pauline Latham has since been criticised in national media, which Belper residents have expressed brings shame on Derbyshire.

Mrs. Latham asserted that refugees are better off in staying in the Middle East so that they can go home when it is safe to.  Sadly this neglects the fact that they have no homes to go to because in addition to fighting in the region, we (Western Forces) have bombed Syria, destroying the country’s cities (an action which Pauline Latham voted for).  It is also impossible to predict when they might be able to return to Syria as we cannot predict when Daesh will be defeated and infrastructure rebuilt.

She asserted that Greece should look after them properly and that it is not our responsibility to help regardless of the conditions in which they live.  Constituents took issue with this on Twitter.

She also asserted that Jordanian camps are safe and a decent life.  UN reports tell us that most of these camps have been attacked, they have suffered from organised crime problems, they are prone to the recruitment of child soldiers, and are critically overcrowded.  Azraq, the camp mentioned by Mrs. Latham, is indeed not full, this is because those fleeing Syria do not feel safe so close to Syria and life in the camp is harsh as there is only electricity from generators in very limited areas of the camps, the camp is overrun with vermin and city dweller refugees are scared of the scorpions, snakes, hyenas and other predators indigenous to the area.

This is all irrelevant to the Dubs Amendment, a scheme proposed and designed by Lord Dubs, who was brought to the UK as a child refugee escaping Nazi Germany.  Lord Dubs estimated that the UK could take 3000 unaccompanied children (these are children orphaned or separated from identifiable family).  We have taken 350 and because no figures were added to this promise, the government can stop it at any number they like.  They were to come from European camps and are thereby not going back to Syria or able to go into Syrian camps.  The intent might be to put refugees off coming to Europe.  It might be to make the Azraq camp appealing as money has been ploughed into it through the European Commission, but that doesn’t affect refugees who have already left the region.

In the wake of criticism from national press and from constituents, Pauline Latham took to Twitter and said that her words had been misconstrued: 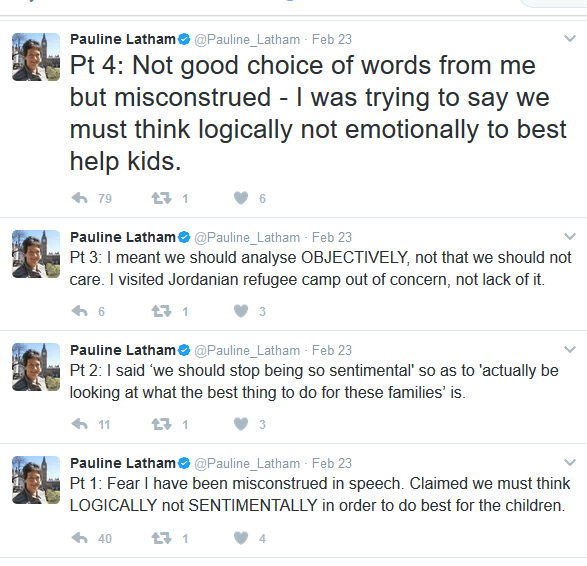 She has also issued a “clarification” on her official website.  In the statement she talks about the money which the UK has spent on the refugee crisis and how we have taken in other refugees.  Those refugees came here through other schemes, many intended to reunite families and is not the issue at hand.  The issue is the premature closure of the Dubs scheme  (announced as parliament went into recess) which has only brought 350 unaccompanied children to the UK instead of 3000.

If Mrs. Latham’s figures are correct, then Britain has taken in 12,500 refugee children over the last year and has given aid to 250,000 people in Greek camps.

Mrs. Latham’s “clarification” has caused the Twitter anger to continue.  And comparisons to World War II have not been lacking. 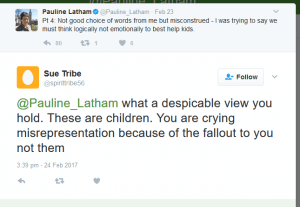 Britain, despite common mythology, did not do its bit during World War II either.  Yes we took some refugees before the war started but we then tightened our borders and increased our refusal for it to be our problem.  When Austria was annexed, we changed visa rules and tightened entry requirements.  65,000 Austrian Jews were then murdered in the Holocaust. Public, political and to some extent media attitudes currently mirror the reality of that previous refugee crisis and despite what Mrs. Latham asserted in parliament, they ARE fleeing life threatening violence.  No, it’s not the Nazis.  It’s Daesh or ISIS or ISIL or IS, depending on one’s preference.

Pauline Latham asserts that they are now in safe countries, so their risk is over.  Recent reports suggest that women and children in European camps are being raped, beaten and sexually abused by traffickers, or forced into sex in return for much needed food and blankets.

Legal proceedings are being taken against the Home Office by London-based law firm, Bindmans. The action accuses the Home Office of acting “unfairly and irrationally” by choosing to accept only minors from the vast Calais camp that closed in October 2016,  ignoring the child refugees in Dunkirk.  The action is brought on behalf of the Dunkirk Legal Support Team.  It is being  paid for by crowdfunding through CrowdJustice. They assert that the British Government, specifically the Home Office, have been arbitrary and mean-spirited in their decision making.

Lord Alf Dubs, the Labour peer who started the scheme to take in more unaccompanied children has entered a 50,000 strong petition against the closure of his scheme to Theresa May.

Justin Welby, the Archbishop of Canterbury, has said that the closure of the scheme puts children at risk of being trafficked and killed.

The furious reaction to Pauline Latham’s speech has been focused on the use of the word “sentimental”.  In response to that criticism she suggests that we should be “logical”.  Is helping people logical?  Do we do it because it is sensible or cost effective or do we do it because of emotion?  We weren’t sentimental last time.  We just took enough to say that we had done our bit.  People are angry because caring about the lives of others is based on sentiment and emotion and they don’t like that reason being derided, scorned and used against them and the issues they support.