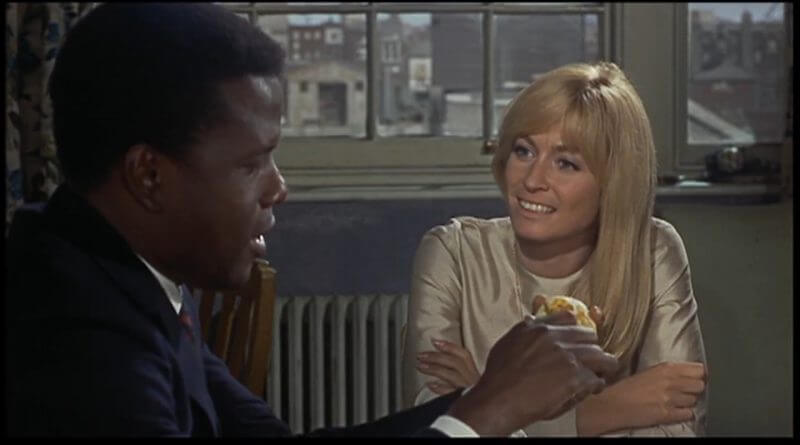 For a small town, Belper has long punched above its weight in producing notable people. But while pioneering industrialists, Olympians and writers may be one thing, international film stars are something else entirely.

Oh. Hang on. We’ve produced two (well-two point five if you count Alan Bates going to school here). The one everyone knows of is Timothy Dalton, and his is a great career to be sure, but we also produced another star: Suzy Kendall.

She was born Freda Harrison. The family business was home decorating and their shop was at the top of King Street, opposite the Ritz. After school in Belper, Freda studied in Derby for a career in textiles and fashion, winding up as a fabric designer at British Celanese. From there came modelling, and from modelling came acting.

All of which sounds like a pretty standard path into showbiz today, but models-turned-actors were still pretty rare in the mid-sixties. What was more unusual was not just to become an actor, but actually to turn out rather good at it.

After a few small roles – she’s there looking pretty in the background in “Thunderball” – Suzy, as she was now, snagged a supporting role playing a model working for photographer Bernard Cribbins in the curious, disjointed Michael Bentine comedy “The Sandwich Man” alongside just about every British comedian who wasn’t too busy that week. Don’t expect to catch it on the telly anytime soon, though: you won’t come across a more cringeworthy series of moments of casual racism outside a UKIP conference.

From there, things happened quickly.

“To Sir, With Love” was a huge international hit with a box office of $42 million from a $600k budget in 1967. Sidney Poitier plays a Guyanese schoolteacher in an East End school beset with multiple drama-friendly problems (racism, violence, teen pregnancy, the fact that most of the Upper Fifth are clearly in their late twenties). Suzy stood out as a sympathetic colleague.

Next came the lead role in Peter Collinson’s home invasion drama “The Penthouse”. It’s a difficult watch today, coming across like “Straw Dogs” as directed by Ken Loach, and Ms Kendall reportedly didn’t like the film. Her performance, though, is outstanding – she can more than hold her own against her far more experienced fellow cast members and an often dreadful screenplay that never once lets you forget it started life as a stage play. By now, Suzy Kendall was one of the most sought-after British stars.

Another film for Collinson followed. “Up The Junction” was the second screen version of Nell Dunn’s controversial novel (the first was a rather more gritty BBC production directed by Ken Loach). Once again, the Local Girl Made good was the best thing on the screen. Another stand-out in the cast is Adrienne Posta. She’s Suzy Kendall’s contemporary in this, but she was one of her pupils in “To Sir…”. I knew those kids were lying about their ages.

Working on the unsatisfying comedy “30 is a Dangerous Age, Cynthia”, the plus side was that she met her first husband, Dudley Moore, although the film itself underperformed. International projects beckoned, and they were a mixed bag – both in terms of critical reception and box office.

1970’s “The Gamblers” was a clever, fast-moving updating of a Gogol story about card sharks and conmen, but it was the same year’s Italian “Giallo” thriller “The Bird with the Crystal Plumage” that has become her signature film.

Dario Argento’s Hitchcockian tale (his first) of a serial killer stalking the witness to a murder was initially scorned by critics, but became a huge success. The film ran in one Milan cinema for over three years and is today regarded as one of the finest of its genre. Hell, it even made the “1001 Films To See Before You Die” list (Mrs M bought me the book. I’ve only got nine left. Is she trying to tell me something?). “Bird” is an endlessly stylish, tightly-plotted, operatically violent exercise in bonkers storytelling. Nothing is what it seems, the plot twists like a pretzel made by meth users and everyone’s a suspect. What it needs is someone to anchor it in the real world and stop it spinning off into an unwatchable mess. Luckily, that person is Suzy Kendall, who brings a sympathetic, intelligent presence to the role of the witness’s girlfriend. The small matter of her being the only actor in the cast you don’t want to slap some sense into doesn’t hurt any, either.

Giallo gave Kendall a screen identity, and it largely defined her career into the Seventies. Films rejoicing in titles like “Torso”, “Tales That Witness Madness”, “The Story of a Cloistered Nun” and “Spazmo” were never going to trouble the award ceremonies, but they stand, by and large, as entertaining horror/thrillers that do their job efficiently and don’t have ideas above their station. And Belper’s Own is often the best thing in them.

Suzy Kendall retired from acting in 1977 (although she is credited as “Special Guest Screamer” in 2012’s Giallo homage “Berberian Sound Studio”).

You may have guessed that I’m a fan. She has, for me, two qualities rarely found in actors. The first is “Self-Awareness”: She understood her own screen persona and worked within it. The second is less tangible – “Believability”. It’s a quality that few have, and she holds in common with actors as diverse as James Cagney and Boris Karloff. It boils down to a (seemingly) simple trick that surprisingly few people have ever been able to nail: she may not have always given the finest technical performance, but you always believed every word she said.

Featured Image: Suzy Kendall with Sidney Poitier in To Sir With Love