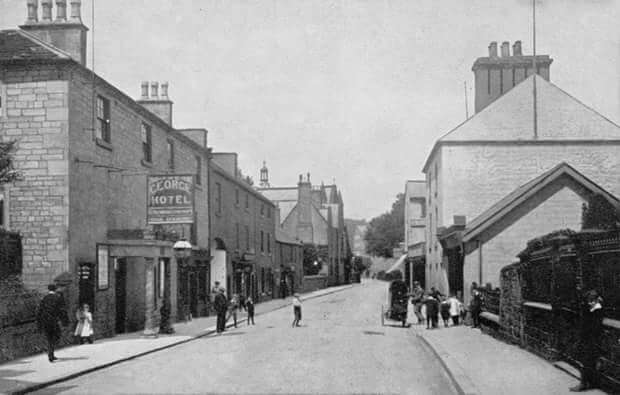 Anyone driving north to south through Belper will know how difficult it can be getting along the A6. You may think it’s a relatively new problem – you may be surprised to hear that congestion on Bridge Street was first acknowledged as a predicament for the town over 90 years ago.

The mid-Derbyshire section of the modern A6 was created when the mill-owning Strutts and Arkwrights funded a turnpike road from Derby, passing through Belper and Matlock. An Act of Parliament allowing the building of the road was passed in 1817, and the road was officially opened in 1820. But Bridge Street, from King Street to The Triangle, already existed as part of the Nottingham to Ashbourne Turnpike Road which came down King Street and headed off across the river at Bridgefoot. So Bridge Street was heavily used for both routes, hence the success of two coaching inns, The George and Dragon and The Red Lion (now the Lion Hotel).

Bridge Street was tight, but in those days it wasn’t such a problem. A century later, the motor car had arrived in Belper, and in 1923, for the first time, a congestion problem was acknowledged, and proposals were made to Belper Urban District Council for widening the street. After much discussion, the idea was dropped.

In May 1935, councillors discussed a bypass for the first time, starting from opposite Gibfield Lane and ending at The Triangle. Widening Bridge Street was also discussed again, as was a road on the west bank of the river, running from Milford to Whatstandwell. The council approved the widening scheme but not a bypass, yet still no action was taken.

Lobbying by Belper MP George Brown in September 1958 temporarily halted a planned road scheme across the meadows, to allow the townspeople’s views to be heard. A public meeting was called to put together reasons for opposing the new road plan, and these were collated for a formal representation to the Ministry of Transport. The following May, Brown lead the anti-road deputation to the Ministry. The widening of Bridge Street was raised again as an alternative. Finally, in May 1960, Brown’s protests over loss of sports facilities were said to have been a major influence in the final decision to scrap the plans for a bypass across the Meadows. Fourteen years passed, then in November 1974 it was announced that Bridge Street would not be widened after all.

In April 1976 a new bypass proposal was labelled ‘third-rate’ by Amber Valley Councillors, with claims that public opinion was ‘25 to 1’ against the scheme. A public meeting was held in February 1978 to consider plans for a new road. About 40 turned out and all made strong objections.

Ten years passed, and then in 1988 Amber Valley Borough Council was told the possibilities of a Belper bypass were ‘beyond 2000’ as Derbyshire County Council regarded it is a low priority scheme.

In July 2001 interest in a relief road was expressed again in consultation exercises and by councillors following a Future of Belper Conference.

It seems discussion of the possibility of traffic improvements in that part of the town come round in a regular cycle, and for now there’s no solution in sight.

3 thoughts on “A Brief History Of The Belper Bypass”