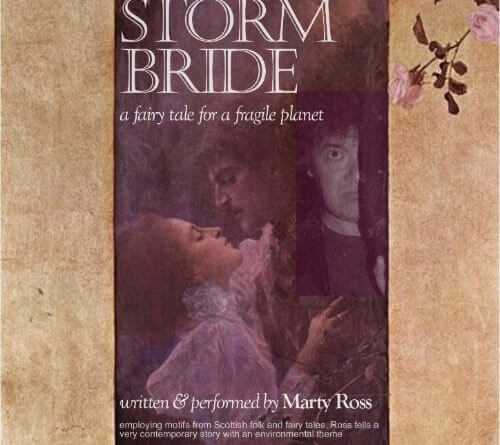 Storyteller Marty Ross is bringing new show ‘The Storm Bride’ to one of his “favourite yarn spinning haunts,” Belper’s No. 28 on the Market Place. The show will take place at 7.30pm on Feb 25th.

Marty Ross is the author of many BBC Dramas, Doctor Who audio dramas and theatrical plays. He regularly performs live storytelling throughout England and Scotland.

Ross will be performing a contemporary fairy tale, using motifs from Celtic folklore in a modern context. The performance will explore the dangers of powerful men throwing their weight around as regards the future of the planet.

Ross describes it as: “A once upon a time tale for the Trump era (the first scene even features an Alaskan pipeline).”

In ‘The Storm Bride: A Fairy Tale For A Fragile Planet’, a billionaire has fracked his way to a newly discovered energy source in the Scottish Highlands. But the substance in question has caused an environmental catastrophe – and supernatural forces in the valley are demanding payment in kind for the damage done to their ancient territory, in a very modern variation on traditional tales of fairy abduction etc.

Whether interested in these issues or simply looking for a thrilling theatrical treat, The Storm Bride looks set to be a fascinating adaptation of Celtic folk stories.

Tickets are available to book in advance, you can do so here

Or alternatively contact him directly at this address and pay on the night (Tickets £8 / £6).