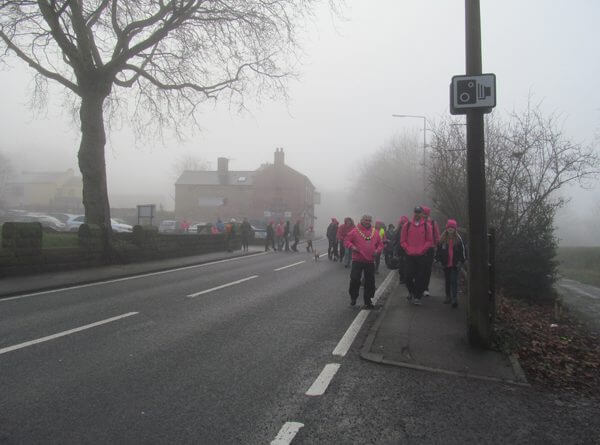 Belper Mayor, Gary Spendlove accompanied by his Ripley counterpart, Alwyn Bridge, transplant games medal winner, Simon Elmore and more than 30 others set out from a foggy Strutts Community Centre car park at 9.00 am on a cold Sunday morning on a 100 mile walk through Derbyshire.

Their aim is to raise organ donor card awareness and to raise funds for four transplant charities. Gary would never describe himself as super fit but he has been training by taking long walks of 10 or more miles. Thus 100 miles by the time they return to Belper on Saturday 4th February will be somewhat challenging. There is a cheerful determination and passion in his voice as he tells Nailed that if what they are doing saves just one life it will be worth it. Gary has been inspired by Simon Elmore who had received a donated kidney that completely changed his life and progressed to become a gold medallist at the world transplant games. Gary says: “Simon has been the inspiration for this epic walk and we sincerely hope that the effort may save lives in the future”.

“There are 6,500 people on the transplant list in the UK, many in the local area. Around 1,000 people every year die waiting for a transplant,” explained Gary, 59.

“Meeting Simon was an inspiration, as he has shown what can be achieved with the gift of a kidney, even though he was terribly ill before.”

The 41 year-old family man suffered kidney failure 8 years ago and he was struck down by serious health problems linked to it. In January 2015 after years of dialysis Simon received his life-saving kidney transplant.

A keen sportsman, Simon was driven by the desire to show how transformative a transplant can be. Within days of his surgery he was walking 3 ½ miles round the hospital, and within months he was competing in the British Transplant Games in Gateshead, winning several silver and bronze medals in a range of events from running relay races to archery. He has since gone on to compete at European and World Games.

”The Games are all about organ donation and without the special people who donate many of us would not be here at all,” says Simon.

The first day takes the walkers to Ambergate, Whatstandwell, Alderwasley, Wirksworth, Cromford, Matlock Bath, Matlock and on to Two Dales. You can follow the whole route on their Facebook page at: https://www.facebook.com/walkforlife100miles

You can dip into your pocket and donate at: https://www.justgiving.com/companyteams/TheEpicWalkForLife where you can also track how much of their £2,500 target has been pledged to date.

One thought on “Mayor Starts His 100 Mile Trek”