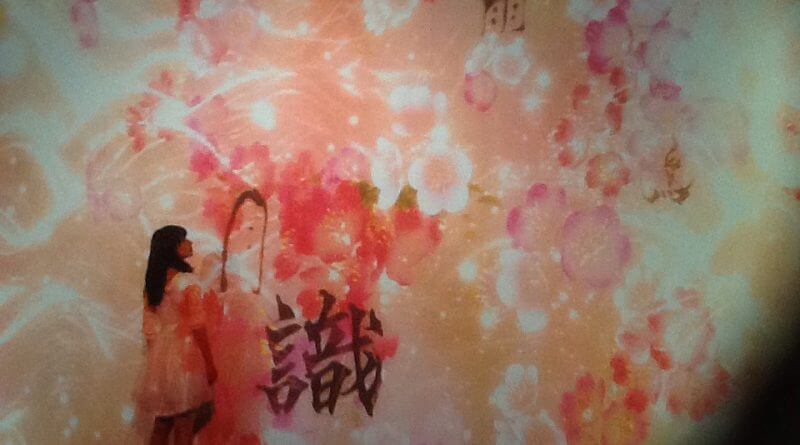 Just for a moment, imagine that you are suspended in the middle of a huge flotation tank, shrouded in the most intense cobalt blue light which temporarily blocks your ability to think of anything else and that will give you some impression of the immediate impact this installation had on my senses.

I urge you to see this for yourself as mere words cannot describe the intense feelings of tranquillity and calm that this kind of total immersion has the ability to convey…it may help if you’re a hippy at heart (guilty!).

However, I couldn’t stop myself having at least one intrusive thought which was a reflection on how the experience of all this ‘natural ‘world was ‘virtual’ and had been computer generated. I began to wonder if the clever Japanese ‘teamLab’ who created this were all sitting in a concrete high-rise office block looking out onto ‘fields’ of concrete car parks (listen to Joni Mitchell, Put up a Parking Lot at this point).

This interactive exhibition is great for kids of all ages or just the young at heart. You may have to try and stop yourself reaching out instinctively to catch a passing snowflake! It’s free to enter and is on till early February 2017 so go see.

What a Loving, and Beautiful World (2011), is a 3-screen installation of projected computer generated artworks which will immerse audiences in a stunning interactive art experience in QUAD Gallery.

The installation features twenty-two Sino-Japanese characters by the calligrapher Shishū which cascade down from ceiling to floor. The artwork is activated either by touch or by shadows which transform the images into new motifs associated with the meanings of the characters—mostly inspired by nature such as the sun, moon, water, trees and birds.

As these images and the viewers interact with one another, more forms emerge that transform into and ever-evolving installation landscape. Sound is also triggered and transformed by audience interaction which ultimately generates a rich multi-sensory experience that is dependent upon the actions of visitors in the gallery and never repeats itself.

The exhibition is free to view. Watch a video clip here.

2 thoughts on “Review: ‘What a Loving, and Beautiful World’ At The QUAD, Derby”