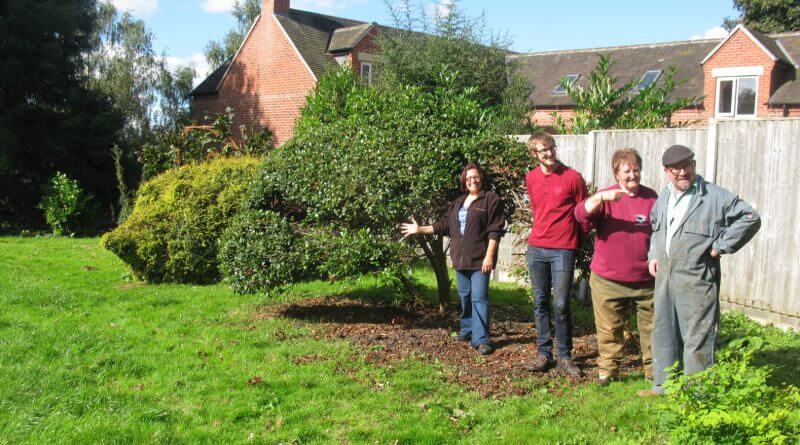 Every Sunday morning, instead of sleeping in late or cooking a hangover busting fry-up, the small, but tireless volunteers of the Festival Garden on Crich Lane are working hard to restore the modest green space to its former glory.

If you have visited recently, you may have noticed that Belper’s forgotten Festival Garden has been undergoing a transformation of late. Flower beds are being tidied, borders are being edged and the bushes are slowly taking on strange new shapes which, in the middle of winter, may not be obvious to the average dog walker.

Belper is renowned for its well-kept green spaces that are maintained throughout the year by numerous volunteer groups, residents and the town council. Whilst many will be familiar with the River Gardens, Beaurepaire Gardens, Belper Parks and the Memorial Gardens it seems that the Festival Garden is largely forgotten about.

The Festival Garden in Belper opened in 1951 as part of the Festival of Britain, a country-wide event held by the government to give British people a sense of recovery after the devastation of the Second World War. Built on top of an old bottle tip, the garden was intended to be a viewing platform from which visitors could see all the way across the valley.

Speaking to Janet Ashmore about why she joined the group, she said: “When I first moved here I remember coming to the gardens with my then partner and the dog and thinking what a fantastic view it was. I hadn’t realised how neglected it had become. It’s a festival garden and I have got a real affinity with the Festival of Britain. I just wanted to give something back to the town and resurrect the Festival Garden.”

Back in 2014 Transition Belper were asked by Belper Town Council to become involved with the Festival Garden. In September of that year Alice Russell, an early lead at the Crich Lane Community Gardens, organised an open day to garner the views of local residents on what they thought could be done with the space. Around 30 residents attended and their feedback highlighted a need for the garden to once again encourage wildlife and also for a return of its original views.

Current organiser, Richard Bett said: “We spoke to local historian Adrian Farmer who said that the Festival Gardens were built as a viewing platform to see the Derwent valley. The idea is to remove the canopy of trees that have grown over time to restore the original view.”

Transition Belper member and artist Richard Bett took over from Alice as leader of the group and has been using his previous expertise in topiary to create living sculptures around the garden. Topiary is the art of training plants into stylised shapes or forms, below are some examples of what the shrubs and trees of the garden could look like:

Belper has recently been entered into the RHS Britain In Bloom 2017 competition and it will be interesting to see if the Festival Garden will feature. Water is the theme for Belper’s 2017 entry and the gardening group are endeavouring to have their dolphin and sea lion shaped topiary projects (emerging from beds of blue flowers) ready in time for the judging of the competition.

With the tops of the trees starting to be cleared and the view over the valley gradually being restored, it is hoped that the Festival Garden’s fortunes will change. Like topiary, it may require some patience, but over time the Crich Lane gardeners are certain they can turn it into a must see attraction that Belper will be proud of.

Meanwhile, the Crich Lane group are always looking for assistance. They meet from 11 am to 2pm most Sundays and all hands are welcome.

8 thoughts on “Inside Belper’s Secret Garden”