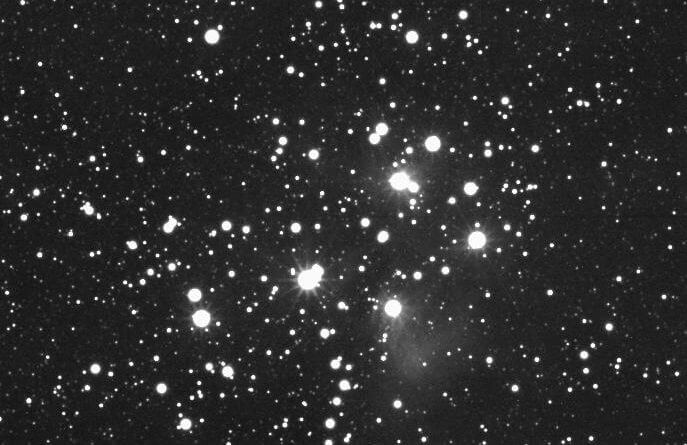 January started off nicely with a pleasing alignment of Venus, Mars and the crescent Moon on the 2nd of January. The night sky in January will bring: similar alignments (as Venus and Jupiter are prominent throughout the month), a chance to spot Neptune, and January is also a good month in which to observe the Pleiades Cluster.

The planet continues to shine brightly in the southwest and will climb higher in the sky throughout January. Through a telescope you will be able to see that Venus is in a “half moon” phase and as we approach early February it will gradually wane to a crescent. On the night of the 31st of January, just after sunset, Venus will appear to form a triangle with Mars (diagonally above) and the new crescent Moon (diagonally below).

Jupiter is shining brightly in the early morning sky, look towards the south to see it. By the end of the month it will be rising before midnight. On the 19th of January, from 2.00 am onwards, Jupiter will appear between the Moon and the bright star, Spica, seeming to form a line. (Spica is the brightest star in the constellation of Virgo).

As Jupiter is such a large object even a small astronomical telescope will reveal detail; including all four Galilean moons and Jupiter’s equatorial  bands (formed by its dense cloud formations). The famous Great Red Spot (in fact a giant storm system circulating in the atmosphere of  Jupiter) is harder to see. If you want to observe the Great Red Spot it is best to use a guide like Cal Sky’s apparent view simulator, which will show when it rotates into visibility. Bear in mind that you might not be able to see the Great Red Spot with a smaller ‘scope.

Mars is still visible in the south west after sunset (although it is getting dimmer and smaller) and will climb higher in the sky throughout January. Mars is currently moving away from Earth and, unfortunately, 2017 will not be a good year for observing the red planet.

On the 12th of  January it is possible to find Neptune by using Venus as a marker. Looking towards the south west, after sunset, it should be possible to see the brightest and the dimmest of our planet’s paired in the sky. Venus will be obvious, but you will need binoculars or a telescope to observe Neptune in the same field of view. Look for a blue, small dot to the lower left of Venus and that will be Neptune.

When it is seen through binoculars the Pleiades Cluster (or the Seven Sisters)  is one of the more beautiful sights in the evening sky. The Pleiades form an open cluster containing over 3,000 stars and is one of Messier’s 110 objects (designated M45).  Its brightest stars (the Seven Sisters) illuminate the dust cloud surrounding the cluster, producing a halo of blue reflected light.  It is well worth a look, and is easily found in the January evening sky. On the 8th of January you can use the Moon as a marker as it will appear just below the Pleiades, in the southeast, from 7.00 pm onwards. If you miss the Moon on the 8th use this link to wikihow for another method of finding the Pleiades.

The International Space Station is now visible in the early morning in time slots between 5.00 am and 7.40 am. It is only visible for a couple of minutes but on most mornings you will be able to see it pass twice (separated by about 95 minutes). Check the Spot the Station site for its precise time and direction.

The Belper Astronomy Group continues to meet in the Queens Head, Chesterfield Road and consists of like minded people talking about astronomy and related topics over a drink or two. If the nights are clear there are opportunities to observe from the “patio” outside the Queens Head. Belper Astronomy Group meetings are held on the 1st and 3rd Thursdays of the month, from 7.30 pm onwards, and the next meeting is scheduled for the 19th of January. Check out their facebook page here