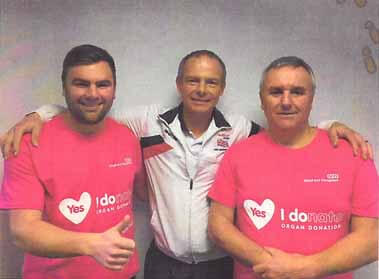 Gary Spendlove, Mayor of Belper is planning a 100 mile walk round Derbyshire and Nottinghamshire at the end of January to raise awareness of carrying an organ donor card.

“There are 6,500 people on the transplant list in the UK, many in the local area. Around 1,000 people every year die waiting for a transplant”, explained Gary, 59, who has been training for the walk for weeks.

“Meeting Simon was an inspiration, as he has shown what can be achieved with the gift of a kidney, even though he was terribly ill before”.

The 41-year-old family man suffered kidney failure 8 years ago and he was struck down by serious health problems linked to it. In January 2015 after years of dialysis Simon received his life-saving kidney transplant.

A keen sportsman, Simon was driven by the desire to show how transformative a transplant can be. Within days of his surgery he was walking 3 1/2 miles round the hospital, and within months he was competing in the British Transplant Games in Gateshead, winning several silver and bronze medals in a range of events from running relay races to archery. He has since gone on to compete at European and World Games.

“The Games are all about organ donation and without the special people who donate many of us would not be here at all,” says Simon.

Gary and Simon will be walking from one local hospital to another on a hilly and tough route, joined by as many people who are able to be there for all or part of the week. The 100 miles takes in Belper, Matlock Bath, Chesterfield, Mansfield, Ilkeston and Derby before ending back in Belper on Saturday 4th February.

The intrepid pair are planning to give a series of talks to build awareness about organ donation to different groups on the way, as well as fund-raising for a local renal support group VIRS, Anthony Nolan Trust, British Kidney Patient Association and the Nottingham Transplant Team. Their route and updates on progress will be on social media and a dedicated website throughout this walk.

Gary adds: “Simon and I would be delighted to have any help with sponsorship, just join in for or two on the Walk for Life. Most importantly, though, become an organ donor at: www.organdonation.nhs.uk.”

2 thoughts on “Belper Mayor In Epic Walk for Life”