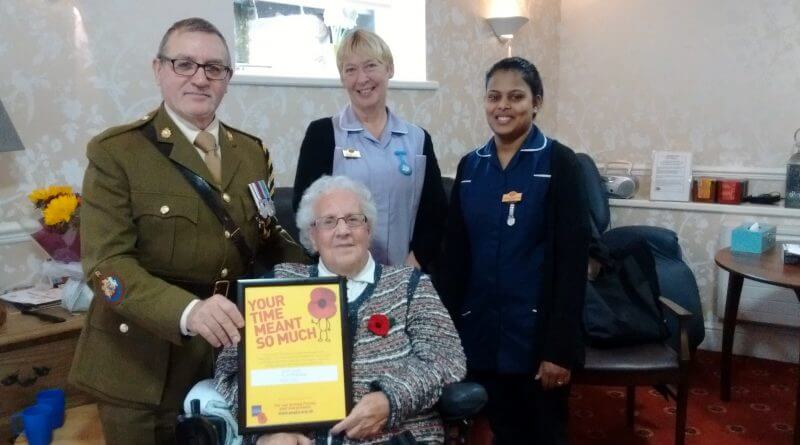 Freda Walters, 89, a resident at Milford House care home, raised £151 for the Belper branch of the RBL after selling 50 of her knitted poppy broaches for Remembrance Day. She started knitting them in July with each one taking an hour to finish.

The money raised was presented to Phil Skawski, county chair of Derbyshire Royal British Legion, at the home in Milford, Belper.

He said: “The money that Freda has given will go to help someone who has lost a leg in Afghanistan or Korea. The country is a much brighter place thanks to the generous spirit and willingness of people like Freda who give up their time.”

Freda, a mother-of-two and grandmother to three children, first started knitting poppies four years ago when her daughter Coleen saw the pattern in John Lewis. She has previously knitted 100 for Radio Nottingham.

She said: “I was nearly 12 when the Second World War broke out. I left school at 14 then went to business college in Mansfield before getting a job as a clerk, it was called essential works, which was important in those days.”

Freda plans to start knitting earlier next year so she can raise even more money.