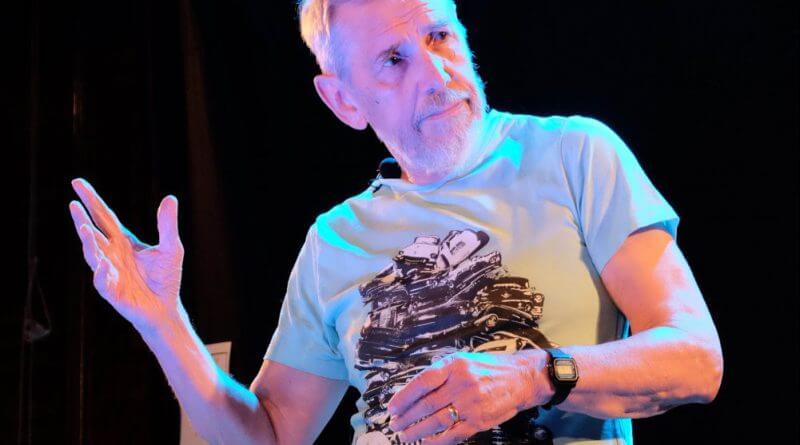 Chris Foote Wood, the brother of comedian / musician Victoria Wood, is coming to Belper to sign his new book “Victoria Wood – Comic Genius”. He will be at Number 28, the Market Place, from 2pm until 5pm on Friday 2nd December.

Chris has become attached to Belper after he appeared on stage at the Tribute To Victoria Wood in July. He returned to attend Judith Hibbert’s ‘Belper Belle Concert’.

Speaking about Belper, Chris Foote Wood said: “It’s a lovely town and the people are so warm and enthusiastic”.

“When I first heard of the Tribute I wanted to be there and I was not disappointed. Fabulous night. In fact I’m coming back in May to host Another Tribute To Victoria Wood.”

Mr Foote Wood decided to publish his biography of his sister after she died.

“She was a hugely private person which is why it was such a shock to so many people when she died. I am a huge fan and I think I can give a unique insight into the person. Her work ethic was fantastic but when we were together she wouldn’t talk about what she was doing. She’d simply say ‘you’ll have to wait and see.’”

He has been criticised for writing about Victoria’s ‘unhappy childhood’. “I’ve written the truth. She was unhappy and lonely. She said so herself. It’s to her credit that she overcame early difficulties to forge her hugely successful career. Her death came way too soon but what it highlighted was the deep love and affection that the British people have for Victoria. I certainly didn’t appreciate how much people cared.”

Chris is a performer himself in the guise of Charles Dickens. He has become a regular at Edinburgh Festival with his one man show ‘The Genius Charles Dickens’. “The show is my tribute to a great man. He was the greatest social commentator of his age and his writing still leaves me spellbound. I also do the occasional stand up gig which is great fun but terrifying. I’m certainly not as funny as Victoria!”

Chris Foote Wood will be signing his biography “VICTORIA WOOD – COMIC GENIUS” at Number 28, the Market Place, Belper on 2nd December from 2pm until 5pm. Profits from the sale of the books will go to charity.

Chris Foote wood will return to Number 28 on Saturday 3rd of December as part of the Victorian Christmas Day. He will be reading from a Christmas Carol between 2pm and 5pm.

Admission is free but donations toward Belper Arts Festival 2017 are requested.