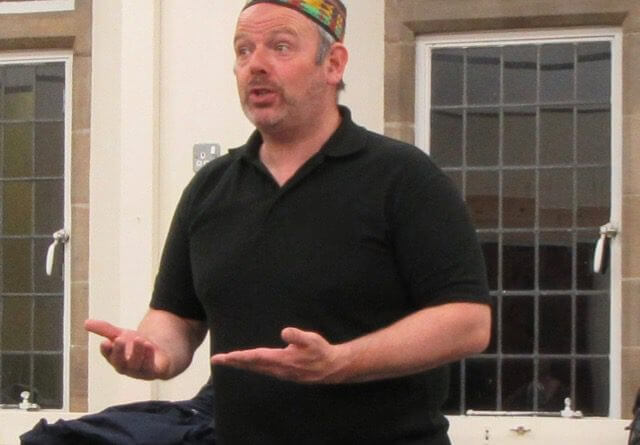 Goldoni – The Perfect Antidote To Trumperi!

Have events stateside been getting you down recently? Worried about the future? Give yourself a break, reaffirm your love of life, and glory in the madness of humanity by watching this hilarious production by the talented Belper Players.

You may remember that this tribute to traditional Commedia dell’arte by Carlo Goldini (1753) attracted worldwide acclaim in highly adapted form through ‘One Man Two Guv’nors’  starring James Corden/Rufus Hound. Only after seeing the brilliant Belper production of the original play did I realise how much more there was to be enjoyed. To get us in the mood there were the beautifully costumed team of traditionally dressed young ‘masks’ echoing the ‘arte’ tradition between scenes with their stylised movements. Then there was the engaging servant, Truffaldino  (Larry Waller)  who took the entire audience into his confidence throughout, sharing his moments of sheer panic,  triumph and outrageously creative deception as he struggled to hide from each of his masters that he was also servant to the other in the quest for double pay and rations – quite a feat as they were all lodged in the same inn. But we were with him all the way. What a hero! – he even had time for the amorous pursuit of feisty serving maid Smeraldina (Kay Swann) who was equally adept at seeing to it that being in service was no barrier to self-determination. Her feminist pronouncement was memorable and won the greatest applause.

But this was only the ‘below stairs’ part of the action. The ‘masters’ (one was in fact a secret crossdresser) were both visitors to Venice, where the action takes place, and were playing out their own story (despite the interference of Truffaldino), which revolved around the intended arranged marriage of one of them with local society catch Clarice – against her will as she had developed the hots for local boy Silvio. Plenty of scope for emotional ups and downs here, and Megan Gibson rode the roller coaster admirably with a side-splitting Clarice.

The performance as a whole was hugely entertaining, fast paced and in my view succeeded admirably in capturing the essence of Commedia dell’arte. Well done director Sheila Kay Sly and the Belper Players!

I haven’t even attempted to explain the plot. You’ll have no trouble in following it, and the dialogue has been intelligently brought up to date. Just sit back and enjoy! There are 2 intervals, which will give you plenty of time to make use of the well-stocked  Strutt’s bar.

A Servant to Two Masters, by Carlo Goldoni, directed by Sheila Kay Sly

2 thoughts on “Review: A Servant To Two Masters – Belper Players”