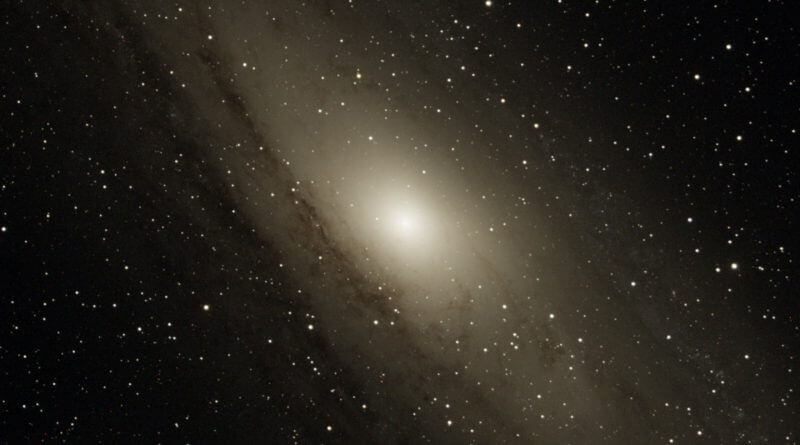 November brings meteor showers from the Taurids and the Leonids (which this year will be competing with bright moonlight); a supermoon on the 14th; Venus becoming prominent as the “evening star” and (for those with binoculars) a good chance to observe the Andromeda Galaxy

Taurids are slow moving meteors appearing to originate from the constellation of Taurus. They do not have a defined peak consistently producing meteors at the rate of around 3 or 4 per hour. The Taurids are notable because they sometimes produce bright meteors known as fireballs. The best time to look for them is from the 4th of November to the 12th, in the early hours of the morning when the radiant point in Taurus is directly overhead. However, the trick this year is to avoid the moonlight so it may be best to look as soon as night falls on any moonless night. As the Leonid meteor shower (see below) is likely to be ruined by moonlight this year, catching sight of a Taurid may be your best chance of seeing a meteor in November. With meteor showers it is best to find a dark site where you can see as much of the sky as possible and just look directly upwards.

A Supermoon on the 14th of November

On the night of the 14th of November there will be a supermoon where the the moon will appear to be brighter and bigger than normal. This is because the moon has a slightly elliptical orbit and, at certain months in the year, it is closer to the Earth than on other months. When this happens the moon is said to be at perigee. When the perigee coincides with a full moon it is designated as a “perigee full moon” or the much catchier “supermoon”. This supermoon is notable as it is the closest the moon has been to the Earth since 1948.

The Leonids are fast moving meteors whose radiant point is the constellation of Leo. The predicted peak rate is around 15 – 20 meteors per hour and the shower is expected to peak in the early hours of the morning at 4.00am on the 17th.  However, the peak night and the nights leading up to the peak are dominated by a bright, waning, gibbous moon will which will prevent sightings of all but the brightest meteors.  If you decide to go out and have a look it is best to keep the moon behind you, so you are looking into the darker part of the sky.

Venus: The planet sometimes know as the “evening star” is now becoming more prominent in the southwest setting about 2 hours after sunset. It will continue to rise in the night sky throughout November. It is easy to spot as, apart from the moon, it is the brightest object in the sky. A small telescope will reveal that Venus goes through phases – just like the moon.

Mars: The waxing crescent moon is close to Mars on the 5th and the 6th of November.  Look towards the southwest in the early evening. The red planet Mars’ current orbit is taking it further from Earth, it is getting dimmer now so it will appear as a slightly orange hued star.

Jupiter. Currently visible in the southeast and rising at 5.00am in the morning. Jupiter is easy to spot as it will be shining brightly in that part of the sky.  Throughout November Jupiter will rise earlier, and towards the end of November we can expect to see it from 2.30am onwards.

In the first two weeks of November the International Space Station will be an early morning object traversing the sky in a time slot between 4.30 am and 6.30am. Check the revamped Spot the Station site for its precise time and direction.

In November the Andromeda Galaxy is almost directly overhead from 8.00 pm onwards.

The Andromeda Galaxy is our neighbouring galaxy, it is approximately 2.5 million light years away (so the light we see has taken 2.5 million years to reach us) and contains a trillion stars. Through binoculars the galaxy looks like a small, fuzzy cloud smudged onto the night sky.  A small telescope will reveal the bright nucleus at its core and larger telescopes will reveal that the galaxy has a spiral shape.

In a dark sky and in perfect conditions it is possible to spot the Andromeda Galaxy with the naked eye, however most of us will need to use binoculars of some sort. Binoculars come in all shapes and sizes and it is generally understood that 8 x 40s are best for astronomy (where 8 represents the magnification and 40 the size of the objective lens).  But you can easily use 10 x 50s and even sporting binoculars (8 x 20s) can be used (though it helps if you know where to look).

The Constellations, Cassiopeia and Pegasus, and the copper coloured star Mirach guide us to the Andromeda Galaxy. This is a very good guide EarthSky on how to use these constellations and the star hopping technique to find the galaxy. Star map apps will also guide you to the galaxy – but I think, in this case, it is best to use the star hopping method described in the guide. Once you have found Andromeda Galaxy in this way you will be able to find it easily over and over again.

The Belper Astronomy Group is a social group that meets in the top bar of the Queens Head, Chesterfield Road, on the 1st and 3rd Thursdays of the month from 7.30 pm onwards. The next meeting is scheduled for the 17th of November.