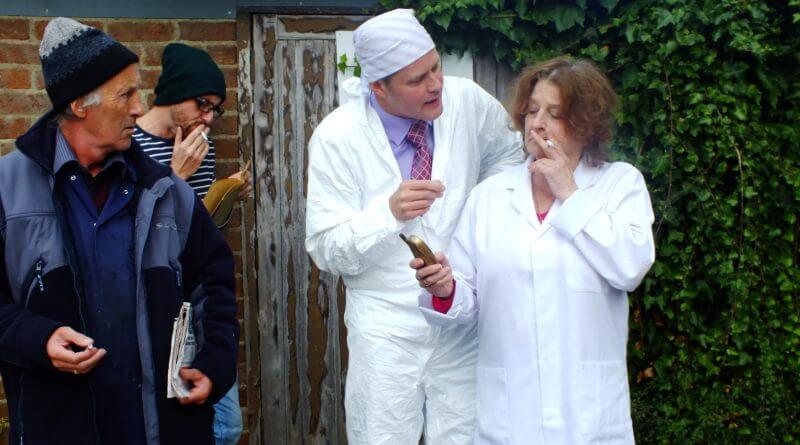 Further to the success of ‘Late’ and their Eagle Award nominated production ‘Fish & Chips’, and following the recently sold-out and acclaimed ‘Shafted’, Marde Hen Productions present their fourth play – ‘Light One Up’.

Taking you back to 2006 with the introduction of the ban on smoking in public places, this new play by Jane Wilton inadvertently throws together a group of desperate and disgruntled employees who are working at a factory that puts the fish into fish fingers.

Banished from their workplace, and huddled together under their dilapidated gazebo, these “pergola pariahs” chunter and mumble their way through their lunch break – putting the world to rights while concealing their own secrets which the audience will become privy to when the characters each  ‘light one up’ and convey their inner monologue.

Not always palatable or conducive to lunch time dining; the audience alone may hear secret revelations, desires, dreams, and lies. Some of these revelations will come back to haunt them, sending the characters, along with the audience, on a journey of self-discovery.

“It was at University that I first became fascinated in what I believed highlighted a new sub- culture which sprang up when the smoking in public places ban was enforced,” says Writer/ Director, Jane Wilton. “I’ve never tried a cigarette personally, but I was fascinated by the way a lot of people were ‘chained’ together when forced to. I have tried to create a mismatched group of individuals.”

“The play is honestly not really about smoking. Smoking is the vehicle that the characters use to communicate. It is a character based play, which examines the dynamics of dialogue and relationships which are explored when people are united in communal activity.”

With a hilarious and moving script, and a talented cast, ‘Light One Up’ is certain to spark up your Christmas period.

Tickets are priced at £8 with performances taking place at the Strutts Centre, Belper on the 1st, 2nd and 3rd December at 7.30 pm.