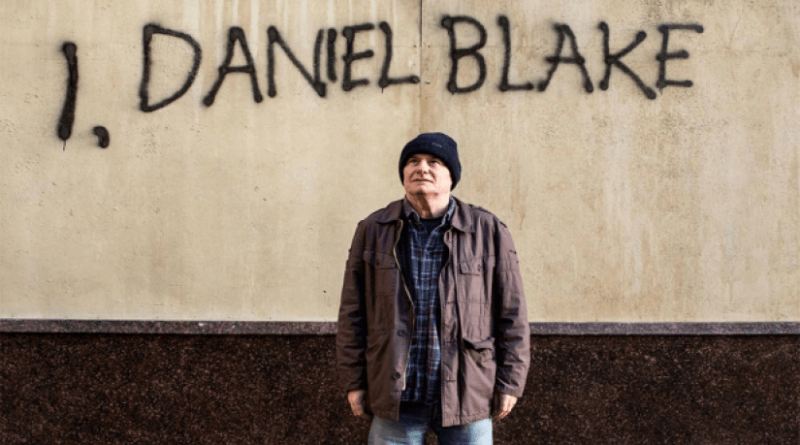 Ken Loach returns from retirement with a timely, savage indictment of the British benefit system.

The film opens with Daniel Blake, a 59 year old Geordie widower and carpenter, recovering from a heart attack and facing long term unemployment. Over a black screen we hear Blake’s phone conversation with a “health care professional” who assesses his condition through the points based system of the ESA (employment and Support Allowance).  The maddening, tedious process results in Blake not scoring highly enough, forcing him to begin an equally arduous process of claiming Jobseekers Allowance.

From here, director Ken Loach and writer Paul Laverty spin a balanced and accurate deconstruction of life in austerity Britain. Showing both sides of Britain’s collapsing benefit system, from overworked frontline staff to single mothers being rehoused hundreds of miles away from their family.

The film accounts the desperate struggle many claimants face daily to not only live, but also survive;  a cruel existence where food bank visits are the norm, 80 people a month die who are deemed “fit for work” and respect is at a bare minimum.

By no means is it an easy film to watch, nor should it be, and as I left the cinema I could hear cinemagoers crying in the darkness.

Having watched the film, I was reminded of a short piece of fiction I wrote during a time when I was claiming benefits, which I thought I would share below. Even before the quick to issue sanctions and intense tabloid vilification, the act of claiming benefits was a dehumanising process of Orwellian bureaucracy.

10 years on and Britain is a very different place, its social divisions run deep and life grows ever harder for those in poverty. As I, Daniel Blake makes so apparent, anyone can fall through the cracks.

‘Could you say that again?’ The advisor examines a small list in her hand.

‘Victor…’ she hesitates in-between the words, doubting her pronunciation ‘…Pulk.’

Behind her, a shouting match erupts at the front desk between a man and one of the staff. On a metal chair next to him is the guy’s girlfriend, and she too is barking orders, trying to make her boyfriend calm down whilst she rocks her child to sleep.

They don’t make you feel like a gentleman and they never have. Inside this cruel, unwelcoming domain the panic sets in as the doors close behind with an air-tightening hiss. Longingly, hungrily I stare at the exit like a prisoner towards the prison wall. I grasp hold tightly of a nearby railing to steady myself.

We, the dead, the infirm, the needy and the poor line every wall with open wallets, a slow terracotta army marching forward, our scent infused with the sweet mélange of morning cider and roll ups. What better way to leave your dreams behind than amongst the walls of this building. Hanging around in this milky-lit cornucopia of computers, where each day rolls into the next with such smooth precision that time itself becomes indistinguishable.

‘Are you here to start a new claim, or to sign on?’

‘I’m here to meet my advisor. Remember? I told you that already.’

‘Oh right, yes, you need be on the first floor.’

I keep moving, flowing in the direction in which the woman points.

When the government redesigned these buildings, they brightened them up, making them look cleaner and more comfortable for the customers. There is a sharp, sterile and calculated glare to the place which hurts the eyes. Too many chrome fittings and computer stations to stand against whilst you wait around. They chose the colours off a corporate palette: blue, green, purple and yellow; colours to connote hello and relax to us, the spurned ones.

We all have to be treated like customers. With respect.

When you no longer have individual worth, because the customer has replaced the individual, you cease to be a real person in the eyes of the benefit system. The same can be said for all these customer advisers. They can’t give accurate advice to a thing which is no longer human. How could they? All they can do is their best to meet the prescribed guidelines they have to follow.

I have analogue dreams of before all these changes to the Job Centre were implemented. Where you simply walked straight in, without the front help desk and security aficionados. You would slowly check each board with each paper printout job and then find something you thought was right for you. Now everything is categorised, compartmentalised into sectors, every second allotted to every customer and every customer under surveillance from the minute the automatic doors slide shut behind you: ‘Please sir check the job points whilst you are waiting, each person to each position, no chairs anymore, waiting is not productive, it’s not time efficient, it evokes communication and despondency and we don’t want any of that, do we?’

A diverse row of multi-cultural smiling faces line every sanitized wall of the bright building as I walk up the stairs to the first floor where the advisors advise you to look at the machines and then advise you to go to another advisor. All I see are the faces of poverty and desperation, the faces of an entire class squeezed more and more by a broken system until they have nothing left.

It makes me feel guilty even being here.

Straight away my advisor Joanna sees me. She is sitting behind her desk and answering her phone. She puts up 10 fingers and mouths ’10 minutes’, and I mouth back ‘Ok’ before she rolls her eyes and mouths ‘I’m sorry’. She then points over to one of the job points. I put a thumb up and walk over to the machine.

Away from the comfy chairs are rows and rows of people being interviewed. Tired of waiting, I walk over to one of the computer terminals as it becomes free. Whilst I’m standing there I hear raised voices again. One of interviews isn’t going as planned.

‘You are aware that we offer financial assistance for travelling to interviews. Do you want me to get you a form?’

‘The doctor signed me off as not fit to work. Why do I need to attend the interview?’

‘Hold on…I thought I had had an assessment and…’ The advisor has made a mistake with the man’s claim. She leans down to look in the drawer, then shouts over to a guy at the back of the office. ‘Derek! Hi, Derek, do you have a P12 on your desk?’

The paperless office has become so paperless that the only possessions the advisors are allowed on their desks are a pen and their customer’s documentation. The customer hasn’t been looking for work hard enough; somewhere along the line he hasn’t met the criteria required for him to continue receiving his benefits. I listen to the loathing in the man’s raspy voice as he reaches the end of his tether.

‘…that one, you know the one I was telling you about,’ he sighs. ‘I went to the job but they laid me off after 2 days’.

I get lost in the database of jobs, in the streams of information, searching backwards and forwards in the digital to find something. A couple of positions catch my eye. You start to convince yourself. Maybe this one is the one, the imaginary figment which will be exactly what you want to do with your life. Or maybe I’m just too old now to start over. I finish the search and suddenly the interviewed man is standing next to me. The chair he was sat on has spun around as if he’s fled the scene of a crime.

‘They don’t want to give us any money.’

‘Who?’ I say instinctively, responding as quickly as I can.

‘Those swine over there! I’ve got a family to support, but they don’t give a…’

Over at the far side of the room, a security guard pricks up his ears and begins to walk towards us. Jo is deep in conversation and seems to be unaware of the situation.

The man’s beginning to look desperate; his eyes start to flick all over as he scopes out the joint. I keep a cool, calm tone to my voice when I reply to him.

‘They have to give you something. That’s what they’re here for.’

‘Listen, no, listen to me, they are paid to slow, to slow it all down so we don’t get any…’

‘The cash, you know what I mean? …The cash, the funny business…there’s too many of us sucking at the pig!’

He starts making pig noises at the advisor who dealt with his claim. I don’t dare turn around to look at her. It’s all getting very uncomfortable, and now I’m wincing at the guy, unable to say a thing

‘…little piggy over there…’ he communicates over to her with another loud grunt. ‘Yeah, she knows, not enough milk to go around, so they make us wait our turn. Let a few starve; who gives a fuck, eh?’

The thin membranes which hold all this order together are starting to come apart before my very eyes. I back away a few steps and my ass touches the job point. From the left a security guard barges towards the guy and begins to usher him out the building as amicably and fast as possible.

There’s shouting and then a quiet hush as the door closes.

I swallow deep into the cask of my gut. It all culminates, the weight of all, all that effort for a fill of the gas card and bit of food. In this uncompromising austerity it requires transcendental patience to survive. There’s no pride to be had in Olympian hoop-jumping through the endless courses of bureaucracy and there’s no virtue found under the crushing weight of poverty.

I run my fingers over my temple and wait for the white lights to go away. When I finally turn around, I see the advisors gaggle together to discuss the ruckus. She looks over and gives a colleague a sort of half disapproving nod mixed with a sigh of relief that the guy has left.

The advisor says her farewells and comes over to me. She looks worried.

I feel like I’m being lifted from the ground and dragged out into the vacuum of space.

Minutes later and I am outside. It is a clear blue morning as I shuffle around the side of the building, out of the shadow of the Job Centre and into a place where the low winter sun beats down on me hard.

A short distance away my breathing starts to regulate itself and a calm descends over my body. Out here, everything is slower. The cars on the road drift around the junction and meander out of sight.

I, Daniel Blake is in selected UK cinemas now. Find a screening near you.