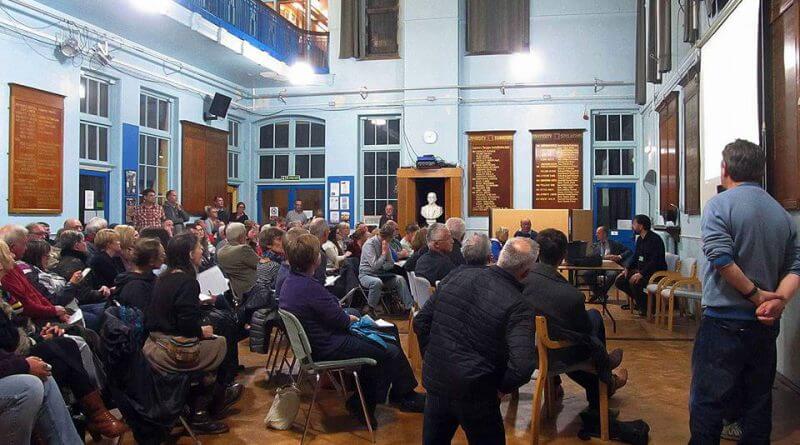 Between 150 and 200 concerned residents attended a public meeting on Wednesday (19th October 2016) at Strutts Community Centre to discuss the recent glut of planning applications around Belper’s World Heritage Buffer Zone.

Clare Thornton, from Amber Valley Planning Department, said that a planning application has been made by Wheeldon developers to build 150 houses on 6 fields “with 30-40 metres of deep landscaping at the rear” which covers an area of eight hectares. The land is currently in agricultural and equine use. The plan includes knocking down the white stables to gain access to the fields beyond.

The planning application was in the early stages and it is usual for such an application to take 13 weeks, which would mean a decision from AVBC by 3 January 2017. However, Clare said this deadline could be extended due to the size of the proposed development.

She suggested that the decision will probably be made at one of the above meetings (though possibly not the January one).

Cllr Ben Bellamy spoke about the area being in the World Heritage Site buffer zone and its importance for tourism; planning practise guidance on WHS treats buffer zones the same as WHS. Ben asked Clare Thornton about what would happen if the planning application is refused and the developers appeal. Clare responded by stating that there is usually a 6 month appeal period during which time the Planning Inspectorate will independently assess the decision with either an informal hearing with experts, the Council, the developers and the public in attendance, or a Public Inquiry with barristers for each side. She said the public can be involved in this process.

Cllr Joe Booth agreed that it was most important that people get their objections in.

NP4B issued a plea for more volunteers to help with the long term planning of a vision for Belper, including a housing needs assessment for the parish over the next twelve years. The Neighbourhood Plan will be approved by referendum, which was to be held next May 2017, but will now most probably be next autumn 2017.

Cllr Maurice Neville (Belper Central) said the NP4B timescale was beginning to coincide with the timetable for planning development decisions and the more involvement from people the better. A member of the AV Planning Group said the NP4B would be decided on first, then the AV Plan. Cllr Neville said photographs will be a major part of the argument for protecting the landscape in the World Heritage Site buffer zone.

Questions were raised as to if the law could be changed so that developers have to use brownfield sites before green. NP4B spokesman said that there is coincidentally currently a Neighbourhood Plan and Planning Bill going through Parliament which addresses this issue.

A speaker from the St Faith’s meeting said there had so far been only 10 objections and stressed the importance of people participating in this consultation by commenting about the proposed housing development. John Boam (from the St Faith’s meeting group) showed a video he has made of local disused buildings and derelict sites (East Mill*, Aristoc and others) where housing development could take place. He said more pressure should be put on developers to build on brownfield sites rather than green fields  and said the fight was the same as for Bullsmoor and Bessalone.

The AV Local Plan 2006 has been retained since there is as yet no new plan, but that the National Planning Policy Framework (NPPF) gets precedence as it is national. Both can be used to make objections. The Darley Abbey appeal successfully argued its case for protection as it is in a WHS buffer zone.

A member of the public asked why the application is even going through to the next stage. Cllr Bellamy made the point that grazing land is worth approximately £24,000/hectare whereas the value of the land (8 hectares) proposed for the housing development would be worth £3 million – £4 million with planning permission.

Someone said grass snakes and adders were reasons for objections to Tesco’s previous proposed building plans at the top of Belper Lane.

Residents suggested there is a danger of parallel planning applications. AV Planning Group spokesman spoke of the cost of cleaning up brownfield sites. Objections were raised that in places – for example, London – where no green fields are available, money is found to clean up brownfield sites.

Residents were also signposted to the NPPF regarding the buffer zone and said a legal objection could be raised to the planning proposal.

A landscape visual assessment has been made because of the importance of the site which is within the World Heritage Site (WHS) buffer zone. The importance of this was stressed and it was recommended that people wishing to object should consult it.

Reasons for objection should be technical issues, such as: the safety of access points, drainage, water pressure and flooding, increased traffic and car headlights affecting residents, wildlife protection and primary schools nearing capacity.

If you make a direct representation, by making a comment or objection, you will be kept informed of the outcome of planning decisions. You can write to Clare Thornton at the Council Offices at the Market Place in Ripley. Her email address is:  clare.thornton@ambervalley.co.uk.

A speaker drew people’s attention to a planning law blog website written by Martin Goodhall who is a solicitor. See http://planninglawblog.blogspot.co.uk/p/how-to-object.html

Alternatively, you can see the “Have Your Say” information here.

There are also expert documents on AVBC’s website. It was suggested that if you know better than the experts e.g. have different local knowledge or experience, then to use that in your objection. There is also a Facebook page for the campaign.

2 thoughts on “Residents Fight To Save World Heritage Status”