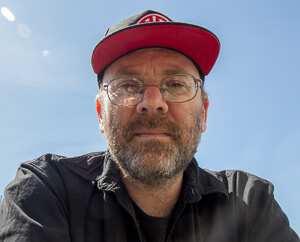 With Bob clutching the Nobel Prize for literature, it is only appropriate to welcome back an artist sprung from the same great tradition of radical American song. From Woody Guthrie through to Pete Seeger and Phil Ochs, American music has always nurtured strong political writers.

After all, this is where Dylan himself came in back in the early sixties.

From his adopted Portland Oregon, David Rovics has toured worldwide and recorded extensively with a song for every situation. Always quick to respond to the news with a song, there is however another side to David’s writing with material drawn from the alternative side of American history, charting the unsung heroes who nevertheless played their parts while neglected in the orthodox records.

With humour and compassion underpinning his righteous anger against injustice and inequality, David remains a unique and original artist.

Or as DJ Andy Kershaw observed ‘If the great Phil Ochs were to rise from the dead, he would be acclaimed as the new David Rovics.