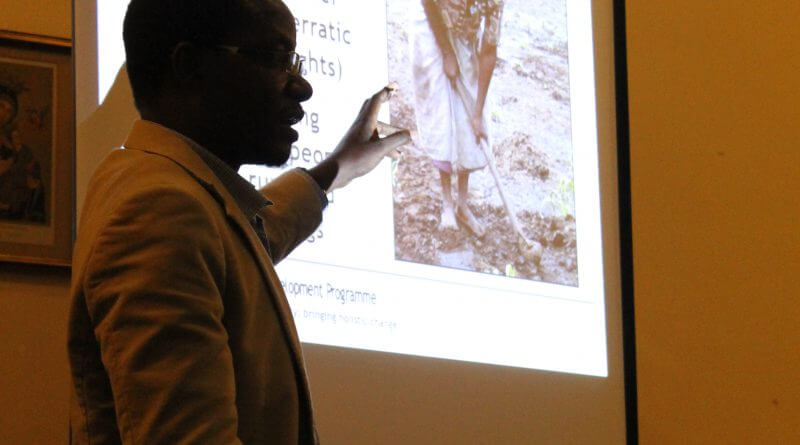 How does climate change directly affect us in the UK? Looking around at the audience of the ‘Speak Up For Climate Change’ event, responses are few; floods…difficulties for home owners to get insurance….severe storms…?

Invisible to us are a whole section of the global population for whom climate change is now a day-to-day battle. For them, ‘extreme weather’ isn’t an occasional storm or flood no matter how dramatic. It is total drought and searing heat, followed by devastating rainfall which completely destroys homes and whole villages in days, says speaker Victor Mughogho as he takes the audience on a journey to his home country of Malawi.

This evening, at the Christian Aid event in Duffield, Victor tells us many stories, including that of Folomina, the middle-aged wife of the chief of the village. Folomina fondly remembers a time when the rains would be guaranteed to arrive promptly on 15th or 16th of October of each year; when crops were able to be accurately planned, often yielding multiple harvests: sweet potatoes, peas and beans, all able to feed families abundantly. But in recent years all that has changed. Since 2012 the country’s huge subsistence farming population has been shattered by increasing cycles of extreme drought and flood which have accelerated alarmingly since 2015. Fields of growing food are either withered to nothing in extreme heat or washed away in flash floods.

Victor has travelled over from Malawi, where he works with the Eagles Relief and Development Programme. The registered charity was set up in 2002 by the Living Waters Church, when a massive drought hit the country. Working through some two hundred local church-based organisations, and partnering with Christian Aid, has enabled the charity to bring relief and, it hopes, increasing resilience to the millions of subsistence farmers for whom there is no welfare system and very little infrastructure.

Victor recounts a journey to visit one of the projects in the Eagles programme. On the way he spotted a store-front with the intriguing sign “No farming, no life” pasted up on the shop front. For him, the simple statement sums up the centrality of farming in Malawi, where 85% of the 70 million population are subsistence farmers. And so we begin to unfold the story behind climate change for people in a country like Malawi: Drought and flood mean no harvest, no harvest means no food, no food means malnutrition, disease and stunted growth in children. No harvest also means dramatic falls in the value of currency and household income, no money means no education, no education means desperation, desperation means crime and prostitution (including child prostitution), this exacerbates HIV…. the tragic list goes on. That is why Victor ended our evening saying that “We simply must have the rains…”

It’s easy to feel despondent and overwhelmed at this point. But Victor was keen to tell positive stories too; stories of ground-level projects which are working to increase community resilience to the effects of climate change. For his communities “adaptation is imperative.” An example is the fuel-efficient stove. In Malawi over 90% of people have no access to electricity and over 98% percent do all of their cooking using firewood. The wood is taken from increasingly dwindling forests, and in turn the deforestation means that soil erosion has become a dangerous by-product of the massive floods. And so the Eagles programme is encouraging communities to plant as many trees as possible, but at the same time is providing people with fuel-efficient stoves which use significantly less wood than the traditional method of cooking on an open fire. There are other benefits to this scheme; there are less trips looking for firewood, meaning the women are able to do more effective work with families and homes.

Other schemes include solar-powered irrigation and micro-finance projects, but Victor brings the stark truth back that none of this matters without rain. This is where we come in. As major contributors to global warming, more developed countries have a responsibility to curb their carbon emissions and so slow down the effects of climate change: “When climate changes, everything changes and demands change [in turn] from policies [and] behaviour.” The people of Malawi are having to make drastic changes to their lives, and as global citizens we are invited to do the same. Can we commit to make changes on an individual level? And can we put pressure on our governments to make the huge political changes which will be required to keep climate change in check?

Theresa May has agreed to ratify the agreements made in the Paris talks in 2015 by the end of this year; but now, we must put pressure on our local MPs and national government to ensure that they are actually fulfilled. Christian Aid, part of the Climate Coalition, wants the government to publish an ambitious low carbon investment plan, to transform the economy in line with the Climate Change Act. The Government must guarantee investment in low carbon technology and low carbon production, whilst at the same time removing investment from fossil fuels.

The charity asks that people write to their local MP, ideally this month, to ask them to speak to the Secretary of State for Business, Energy and Industrial strategy, to keep climate change on the agenda. This is extremely important, as issues such as Brexit and our own economic issues threaten to eclipse the issue of climate change which ultimately underpins our survival as a species.

Victor ended on a message of positivity: “In the equation of change everyone matters; every prayer, every voice, every giving, everything you do here – it matters and it will matter.”