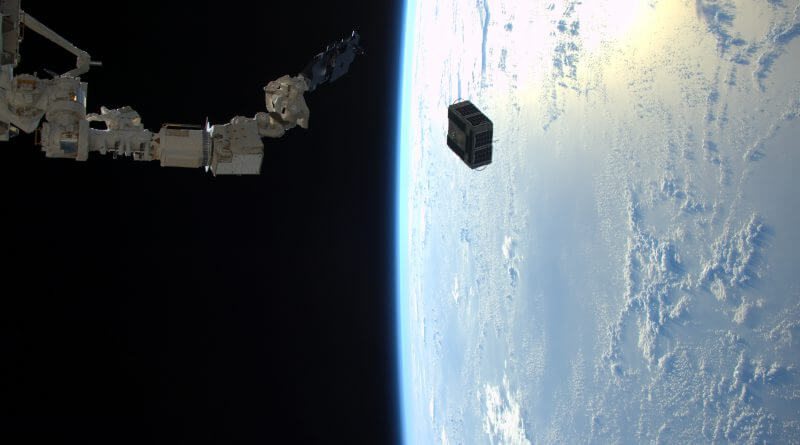 Unfortunately cloud cover prevented observers in Belper from seeing the peak of the Perseid meteor shower. This was a pity as, on one of the few clear nights before the peak, I observed between 7 and 10 bright meteors; which augured well for the main event.

However, whilst looking for Perseids I could not help noticing that there were plenty of satellites to be seen. I reckon about one every 15 minutes or so; all of these were naked eye objects, clearly visible, and appearing across all parts of the sky.  So, as satellites can be seen on all nights of the year, I thought it would be useful to write a brief guide to satellite spotting and to describe some satellite phenomena that might be worth looking out for.

What is a Satellite?

NASA defines a satellite as a man-made machine orbiting a planet or a star.  It is a good definition. All satellites were put into orbit for a purpose, so when we see a satellite we are seeing either a machine in operation, the discarded parts of machines, or machines that have now become defunct. Satellites serve a number of functions but most can be categorised as: spy satellites, communication and navigation satellites, satellites that have a military purpose or satellites that are observing, or measuring, the Earth in some way. A lot of these are big enough, or close enough, that they can be seen as naked eye objects. Of course, we only see them at all because of the sun reflecting off their surfaces: satellites themselves are dark, there are no lights on a satellite.

It is estimated that there are hundreds of satellites visible to the naked eye and thousands more that can be seen with binoculars or telescopes. NASA’s definition also includes “space junk”, that is: rocket bodies, debris, satellites that no longer function, etc. Working satellites and the larger pieces of space junk are tracked and monitored, both by space agencies and also by enthusiasts.  Because they are tracked, satellites are predictable objects. One of the attractions of “sat-spotting” is that it is relatively easy to identify both what is being seen and when it can be seen.

Like any other observation a clear night sky away from street lights is best. The best times to view satellites are just after dark or in the early morning (a couple of hours before dawn). Look straight up and soon you will notice a “star” that appears to track across the sky, this is what a satellite looks like. The satellite will appear to be high up and will move smoothly at a constant speed, unlike an aeroplane it will not have flashing or coloured lights and the satellite will pass in silence. A basic rule is aeroplanes blink; satellites don’t

Some Satellites to Track:

Although it is pleasing to spot satellites at random, it is also possible to track particular groups of satellites. Satellites worth tracking are the International Space Station, the Iridium satellites (as these produce flares) and some rocket bodies that produce periodic flashing. To track satellites you need the following: a knowledge of  your compass points (or to have a mobile phone with a compass setting), the correct time setting, a satellite tracker (see below) and a basic understanding of elevation (i.e. the height of the object as it appears above the horizon).

The International Space Station (ISS) is the biggest man-made object in space.  Because of its size, and because it carries a lot of solar panels, the ISS reflects a lot of sunlight; making it one of the brightest objects in the sky. The ISS passes over the UK at regular intervals and NASA’s Spot the Station web page will tell you when. NASA will give you the date and time of the ISS pass, its direction, brightness, elevation above the horizon and length of visibility. The ISS is very reliable, so go out at the exact time indicated and you should see it pass. Note, the ISS will be passing over the UK between the 7th of September and the 17th of September between 4.00am and 6.00am. Go to the NASA web site for the precise times, otherwise you will miss it.

In addition to Iridium flares other bodies that produce flashes include tumbling rocket bodies. After launching a satellite or payload most rocket bodies continue to orbit the Earth, sometimes for many years. Some of these bodies start “tumbling” in their orbits, reflecting the sun in a series of flashes. Rocket bodies are not as reflective as other satellites, so sometimes the flashes appear to come out of nowhere – like distant camera flashes in the dark. Rocket body flashes are not as predictable as Iridium flares but tracker sites will identify objects that are likely to flash – e.g. the Okean-0 rocket body.

Nasa’s “Spot the Station” is the only tracker you will need to observe the International Space Station. However, for other satellites you will need a tracker that gives predictions for the most visible satellites. A simple tracker is produced by Space Weather.com. This tracker shows only the brightest satellites (they track ISS and the Hubble Space Telescope amongst others). For a more comprehensive tracker, the web sites Heavens-Above and CalSky seem to be the easiest to use for the casual “sat-spotter”. Both Heavens-Above and CalSky include tracking for the 100 or so brightest satellites, and these are the best trackers to use for Iridium flares and flashing rocket bodies.

The n2yo.com web site tracks some 18,000 objects, including space debris. It is harder to use than Heavens-Above or CalSky, but it is a good source of news about satellites and satellite launches.

The website Stuff in Space takes a slightly different approach. Stuff in Space simulates the orbits of all the major satellite groups, providing a fascinating on-screen view of satellites passing above the Earth in real time (it should be noted that not all of these are visible to the naked eye).