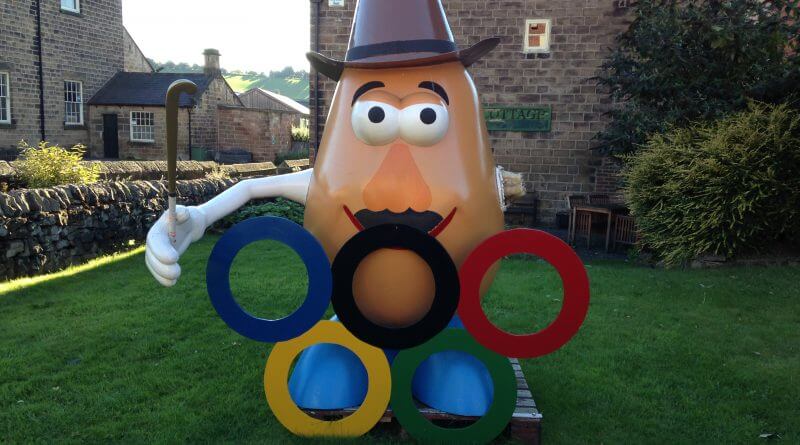 Mr. Potato Head is having difficulty coping with the warm summer that Derbyshire is enjoying.  We found Mr. Potato Head missing an arm over the bank holiday.  Thankfully he hasn’t been vandalised by residents this time.  Belper Town Council has assured us that the heat affected the glue holding on his arm (he has been repaired several times before due to vandalism) and that the arm is in their possession and will be reattached soon, once other local repairs have been completed.

Mr. Potato Head came to Belper in 2001 as a gift from our twin town of Pawtucket, Rhode Island, United States of America.  Pawtucket is the birthplace of the popular toy and Toy Story character and he was sent here as a token of friendship and as a symbol of Pawtucket’s fame.  After all, their landscape was formed by Belper when Strutt-trained Samuel Slater “The Belper Traitor” stole the plans for the Strutt mill, memorised them and took the industrial revolution to America in partnership with Moses Brown, a Pawtucket industrialist who failed to recreate our technology.  Hasbro is now the biggest industrial business in Rhode Island and Mr. Potato Head is a beloved symbol of Hasbro.  All of which they owe to Belper. 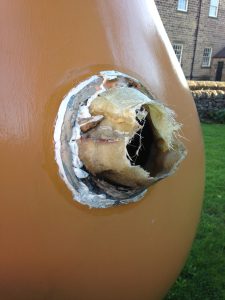 Mr. Potato Head is often touted as dividing opinion and this seems to stem from both the repeated vandalism he experiences and The Mirror running a story last year which only spoke to one local resident, who dubbed him “hideous”.  There are certainly people who don’t like him but they seem to be far out-numbered by people who find him fun or understand what he stands for.  Unfortunately, amongst those who dislike him are those who would damage our town and our friendship with Pawtucket by vandalising him.  Mr. Potato Head was vandalised as soon as he arrived in Belper and has been repeatedly vandalised since, resulting in his less hardy structure.

Of late Mr. Potato Head has been trying to win people over by appearing at local events, getting in on the theme.  Belper Town Council gave Mr. Potato Head a makeover recently, to celebrate Hollie Webb’s historic win of the gold medal in hockey at the Rio Olympics.  The gold medal will also be reattached.

There are only eight Mr. Potato Head statues in the world, including the one which stands outside Hasbro in Pawtucket.  So our celebrity immigrant is a rare piece of consumer art and he is worth over £6000.

I’m going out on a limb here but as our first assumption was vandalism perhaps we, as a community, should respect and take care of this unusual gift, representing a historic friendship which changed the world.  No-one else has one and after 15 years of naturalisation, he’s clearly British to fall apart at the slightest hint of sunlight.