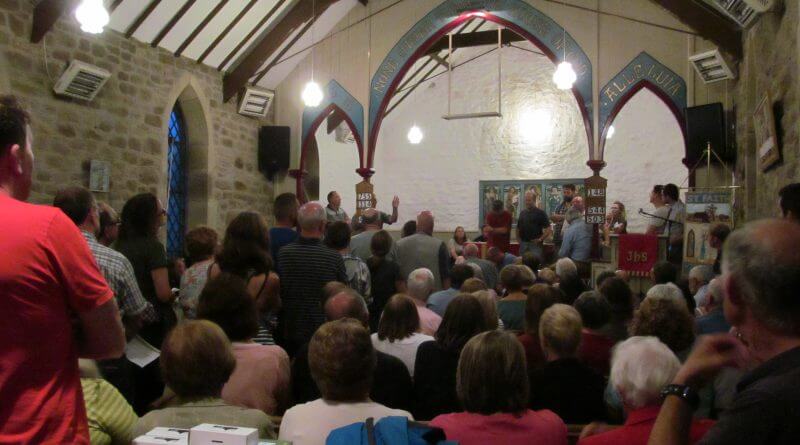 Many had walked the half mile or so up the hill from their Mount Pleasant homes in atrocious weather conditions to pack into St Faith’s, the community centre at Belper Lane End. There were more than 150 in attendance – standing room only and queueing out the door. They had come to mobilise their opposition to Wheeldon Brothers’ plans to build 150 dwellings on fields off Belper Lane and above Whitehouse Rise.

Residents had been called to arms by Paul Terry, the local activist who had lead the campaign to save the Bull’s Head and assisted by Linda Marks who had already been digging into records to find relevant information and Jenny Oldknow building a contacts list and sorting out leaflet distribution. At the top table were Councillors Ben Bellamy and Joe Booth, Eric Johnson from Amber Valley Planning, Dave Fisher from the Neighbourhood Plan for Belper Steering Group and Anne Smith who had been involved in successful battles with developers in Lincolnshire.

This was a chance to put forward ideas to fight the plans and clarify what would be valid objections once a planning application is submitted. There was a call for all the groups fighting potential development in Belper to unite to form a single united front that was more able to raise funds, employ planning experts and mobilise the community than several similar, but smaller, groups.

Those present were asked not to respond to Wheeldon Brothers in detail. Jackie Knight posted on Facebook that at this stage the committee asks that you:

The campaign Facebook page is https://www.facebook.com/groups/1748934938681939/ but if you are not a Facebook user and wish to be kept informed drop a line with your contact details to Jenny Oldknow, 56 Pinewood Road, Belper.

The proposed site is in the Derwent Valley Mills World Heritage Site buffer zone and it was stressed time and again that should any housing proposal on green field sites within the WHS be approved it would set a precedent and open the floodgates that would ultimately lead to the loss of World Heritage Site status and a devastating impact on tourism locally.

The role of the Neighbourhood Plan was also reiterated, particularly by Dave Fisher. Belper residents need to play a big part in deciding where new housing should go and references were made to vacant brownfield sites, the almost derelict East Mill and the mess that is Derwent Street – where planning permission has been granted but nothing is happening. There are other brownfield sites throughout Amber Valley that should be built on before recourse to green fields.

At the end of the meeting those interested in forming a small committee were asked to remain and, as people departed into the pouring rain, they were asked to make a contribution to help towards the costs of leaflets. If you would like to contribute please send to Jenny Oldknow at the address above.