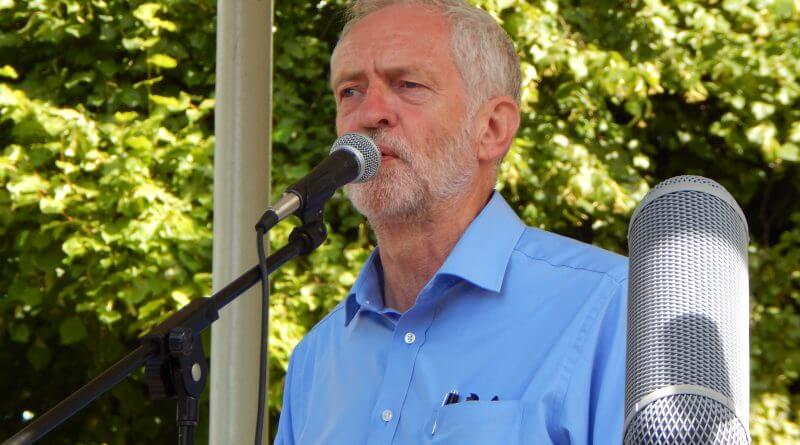 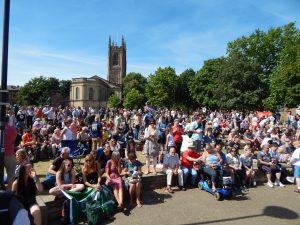 It was the anniversary of the Peterloo Massacre in Manchester, where cavalry attacked 80,000 people campaigning for parliamentary reform, and in part it was at the site of the Silk Mill protests of 1833, which helped to found the trade union movement.

On Tuesday 16th August, Jeremy Corbyn visited Derbyshire to attend two rallies to promote him in the (re)election for leader of the Labour Party.  He is standing against Owen Smith, a former pharmaceutical lobbyist who actively pushed for the dismantling of the NHS. The Derby rally was organised with very little warning (a few days) and Politics in the Park at Matlock was a pre-planned event, where Mr. Corbyn was added to the list of speakers.

Mr. Corbyn gave the same speech at both Derby and Matlock (with minor local differences), although he was noticably more relaxed and jovial at the Matlock rally.  Attendance was high for Derbyshire, with about 1000 people attending the Derby rally and significantly more attending the Matlock Politics in the Park event. 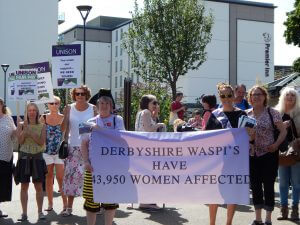 Numerous causes and groups pitched their stalls and hoisted banners to promote their good causes, from trade unions such as Unison, the Waspis (Women Against State Pension Inequality), Say No To Racism, #RipOffRail, Momentum and Belper and Duffield Youth Labour.  Mr Corbyn acknowledged many of these causes in his two speeches.

It was an unusual collection of people – some pitching more extreme agendas (the sellers of The Socialist newspaper proudly declared Trotskyism), the token oddballs (comedic political parties campaigning for Corbyn), entire families, every age of excited child who probably don’t know what devolution and economic uncertainty mean yet, the undecided who came to see whether the reality was more impressive than the headlines they had read, the lifelong stalwarts, the new supporters seeing their own beliefs represented for the first time and I’m sorry but there are indeed groupies, squealing giggling bouncy people wanting the attention of the famous.  They do exist, but they exist where I placed them, at the end of a long list of different kinds of engaged people.

People were very excited, which made filming very difficult as they made an awful lot of positive noise as Mr. Corbyn spoke, sometimes obscuring his words to validate every “if” and “but”, and many people ran about in front of the press cameras or, desperate to be at the front, pulled out notebooks and phones and pretended to be press.   One aggressive man, bizarrely thinking that journalists wear high vis jackets, was even trying to climb the bandstand to get closer photos of Jeremy Corbyn.  He, and others, were dealt with by the super efficient Derbyshire Labour volunteers in their smart red tunics.

Jeremy Corbyn discusses education and some of the local causes:

There was an emergency during the Derby rally, where 18 year old Somer Taylor fainted and then hit her head.  The weather was extremely hot and several people felt unwell as there was no shade outside the Silk Mill.  Mr. Corbyn called for First Aid upon noticing the situation and an ambulance was called.  Miss. Taylor gashed her head open, which was glued shut at A&E. Miss. Taylor is well.
Big issues and first aid call:

Much of Mr. Corbyn’s speech focused on his 10 pledges, with emphasis on what was not happening now and the dire situations which exist in each of these areas of British life and went on to talk about building a better Britain, a socialist Britain. 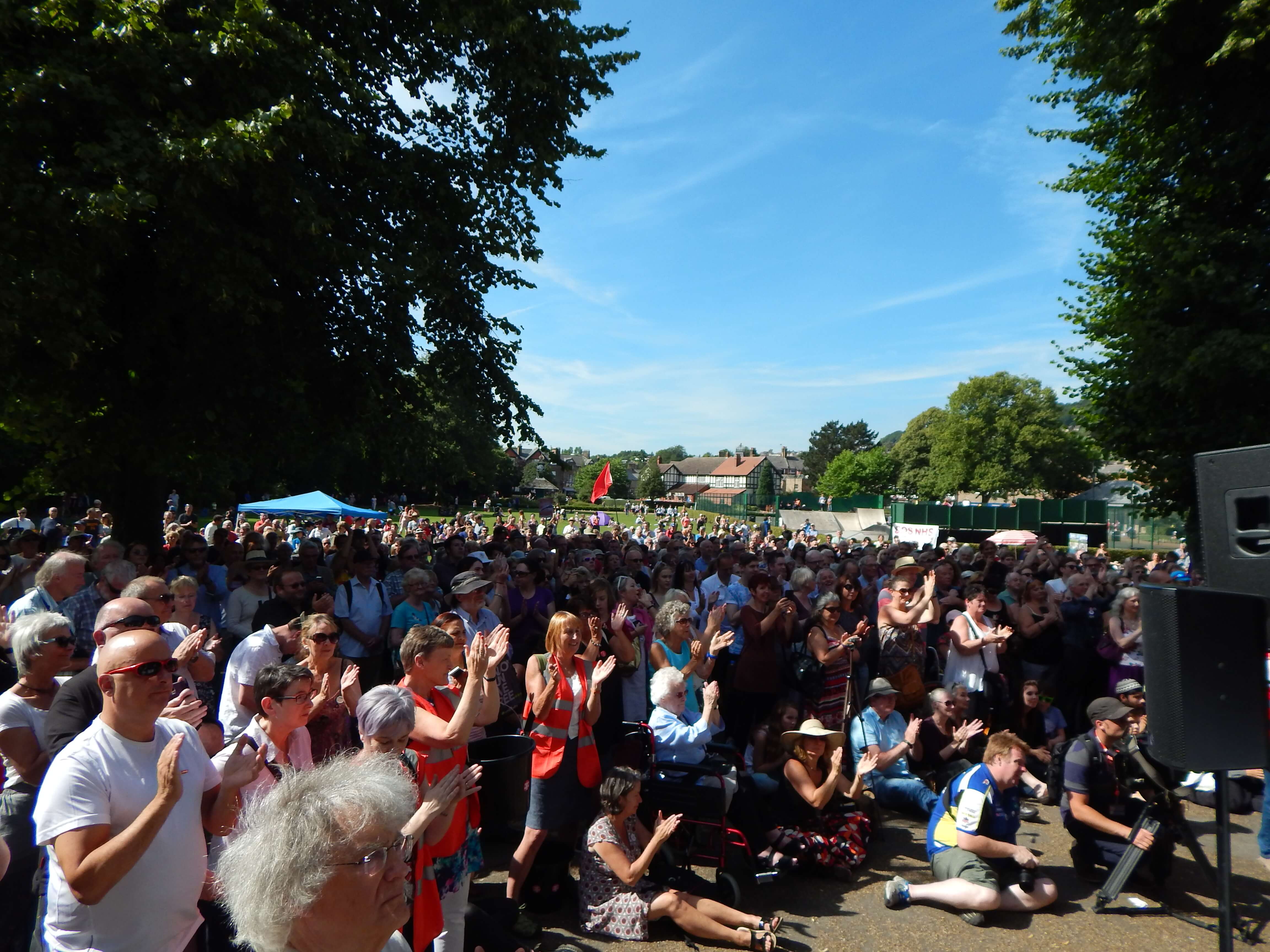 In Matlock there were two very strong speeches from local politicians.  Anne Western spoke about the achievements of Labour in Derbyshire through the County Council, despite Conservative parliamentary representation. Her speech was a revelation of how much is being done to resist austerity and the reduction of services. 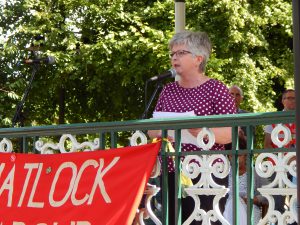 “I’ve been asked to talk about austerity and the cuts to public services.

But I’m not going to do that. I’ve spent every waking minute of the past 3 years worrying about cuts. One third of the council’s budget has gone and we, like all other Labour councils, have had some horrendous decisions to make.

Instead, I’m going to talk about what we’re doing in spite of the cuts.

For years we’ve been viewed by the rest of the country as dinosaurs to insist on providing these services directly through the council. But in the last two winters we’ve been vindicated, because we haven’t suffered the hospital discharges crisis that other places have. We have our own flexible, responsive staff teams who can be there to support people who are ready to come home. You can’t do that with a contracted, out-sourced, commissioned service.

And we’re building new facilities for older people as well. Meadow View up the road next to the Whitworth hospital, a brand new community care centre offering a range of services.

That’s the difference a Labour council makes. So think what a Labour government led by Jeremy could do.

Last year when I spoke at your rally at the Roundhouse in Derby, I said

Meaning that this isn’t just down to one man, we all have to step up.

People have quoted that back to me since then, whenever they have got involved in a community campaign or project.

And hundreds of thousands of people have felt inspired to join the Labour Party.

We are seeing a resurgence of community politics – here in the Derbyshire Dales and down the valley in Belper.

So Jeremy take heart from the overwhelming support you are getting.

Nobody said it would be easy – but it will be worth it.”

The other powerful speech was Uther Naysmith’s rebuttal of the criticism by big media and Coup-Labour that none of the young people joining the party really mean it and are being pressured into supporting Jeremy Corbyn.

Also active at the rally were the brand new Belper and Duffield Youth Labour group who were raising funds for their new banner. They raised £53.14, which covers the cost of their banner. Their main campaign is to oppose tuition fees.  These young men travelled with Mr. Corbyn and were very happy to get autographs and photos with him.

The audience response was hugely positive, with undecided people deciding “I wasn’t sure he could lead us, but everything he said was solid and sensible” and a lot of people who strongly opposed Owen Smith and the coup against Mr. Corbyn’s democratic election as leader, there were also strong feelings about Tom Watson “I’ve always voted Labour but never wanted to join until it changed.  I’m one of the people he’s talking about and what? We’re a cult? That’s so insulting.  He’s a disgrace! I’m disgusted with him.”  And there was outright unmitigated excitement, “Oh my God, he’s here.  That’s him.”  I don’t think that this has ever happened in my lifetime, for people to be so informed, so engaged, so hopeful and invested in a political agenda and people who can deliver it, and specifically in the obvious (by merit of public support) electability of this leader. 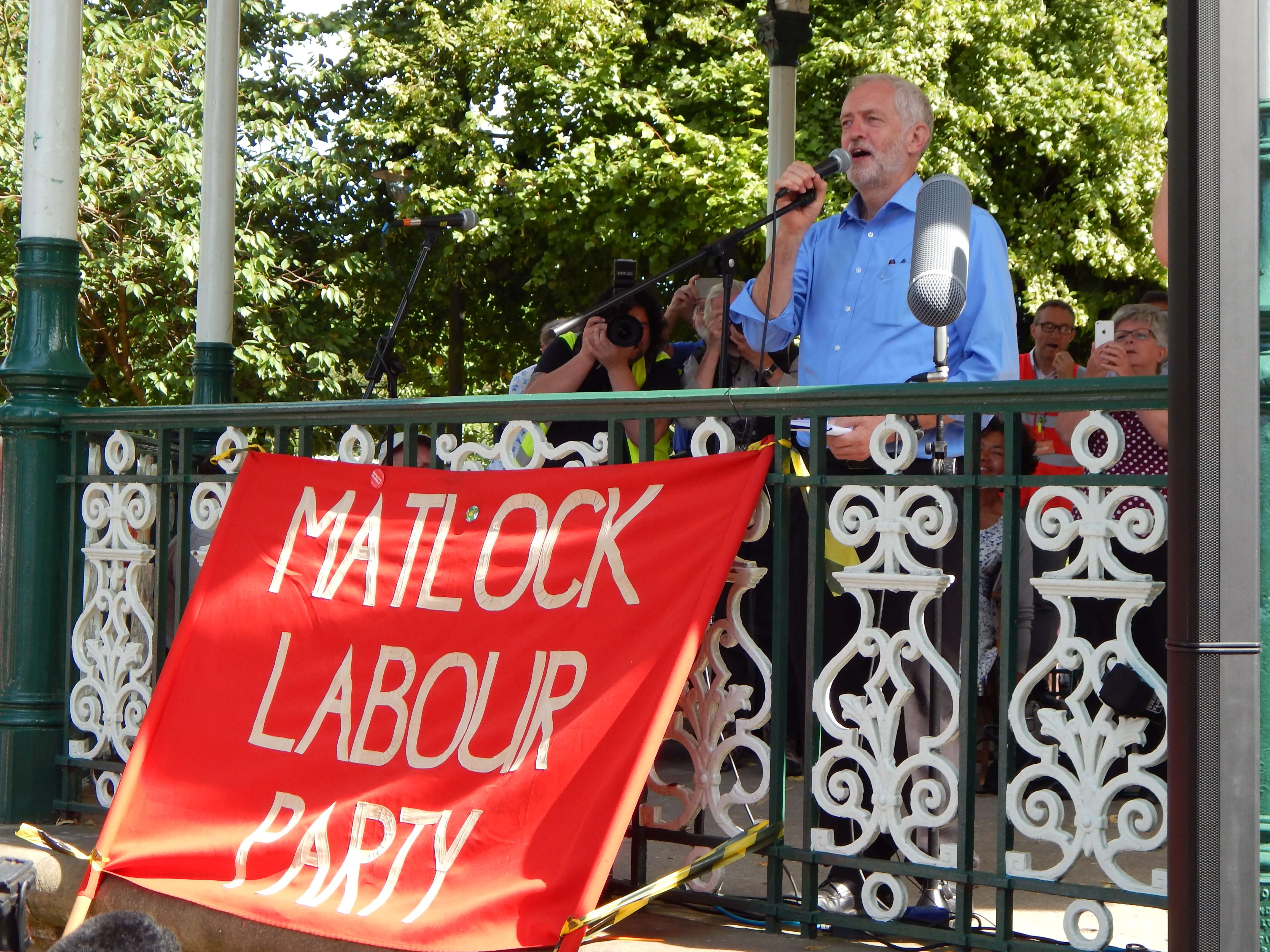 We did request and were hopeful for an interview but Mr. Corbyn focused on the media that gives him horrible press and was immediately mobbed by hundreds of fans afterwards (which caused him to miss his train, which is why he doesn’t book seats).  We have left his press officer with a list of questions from the DE56 community for Mr. Corbyn to answer, so watch this space…

5 thoughts on “Jeremy Corbyn Rallies in Derby and Matlock”