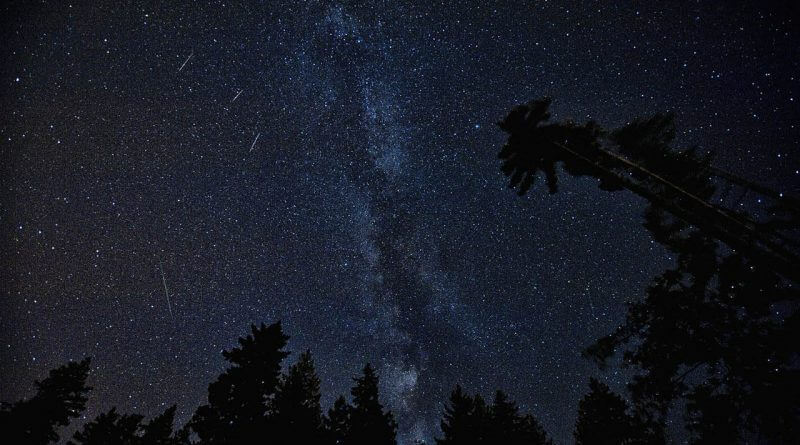 The Perseid meteor shower is predicted to peak between the hours of midnight on Thursday the 11th of August and the early hours of Friday morning on the 12th of August.

The peak rate is expected to double this year, due to Jupiter’s gravity influencing the path of the cosmic debris causing the meteor shower. However, viewing conditions on the night are not the best. A waxing Moon will prevent dark skies until it disappears from view sometime after midnight and, to make matters worse, light cloud is forecast for Thursday night / Friday morning. When the Moon sets, and if the clouds stay away, observers should expect to see a couple of meteors every few minutes throughout the night.

How Can I See The Perseids?

The Perseids can be viewed as soon as it gets dark and observers just need to look upwards. The more sky you can see the better. Remember to find a place without too much light pollution (so you can see a dark sky) and look up.  The best thing to do is to find a place where you can lie on your back, or in a deckchair, or a hammock, so you can look straight up into the night sky.  If there is heavy cloud cover the event can also be viewed on the internet; the Slooh Observatory providing a free live feed plus commentary from 1.00am on Friday the 11th.

When Should I Look?

The Earth is currently crossing the path of the cosmic debris that causes the Perseid meteor shower, so any clear night leading up to the peak would be a good time to look. The early hours of morning provide the best views, so try to observe between midnight and 3.00am. The meteor shower is predicted to reach its peak rate between Thursday 11th of August and the early hours of Friday morning. The meteor shower should reach maximum intensity just before midnight on Thursday 11th of August. This year the Perseids are predicted to peak at 100  –  180 meteors an hour, this is double its normal rate. However, this rate is based on perfect viewing conditions and a 360 degree view of the sky. Casual observers (i.e. you and me) will need a little bit of patience, and should expect to see a handful of meteors every couple of minutes. If you miss the peak nights it may still be worth looking as the shower does not end until the 24th of August – but you will have to stay out longer to see a meteor and you will not see as many.

What Will I See?

The Perseids are considered one of the best meteor showers of the year, so you have a very good chance of seeing lots of meteors during peak nights. The Perseids are bright and fast moving and some leave long trails and afterglows.  Some may appear to be coloured, typically red or yellow. It is worth noting that meteors tend to appear in clusters followed by a lull, so, sometimes, patience is needed. What you won’t see, unless astronomers have got it very wrong, is a meteor storm. A meteor storm is when the sky fills with shooting stars (like a celestial firework display). Meteor storms happen very rarely, the most famous in living memory being caused by the Leonids over North America in 1966.

What Are The Perseids?

The meteor shower takes its name from the constellation Perseus which is where the radiant point of the shower appears to lie. Although the meteors can be traced back to Perseus it isn’t necessary to find the constellation, as long as you are looking upwards you have a good chance of seeing a meteor.

Listening to the Perseids

Meteors don’t make a sound but as they vaporise they ionise the air around them. Ionised air reflects radio waves, so a radio tuned to the right frequency will detect a pinging noise as the meteors enter the atmosphere. You can listen in here: http://spaceweatherradio.com/ at the Space Weather Radio site and you might just catch one. Here is an example of what you might hear: http://spaceweatherradio.com/startup/geminidecho.wav