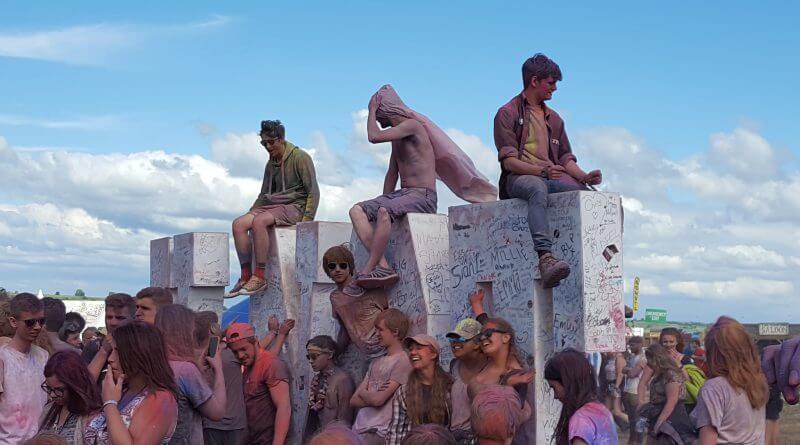 A good festival is like a cocktail, it has to have the perfect mix of ingredients and a large splash of alcohol.

Y Not had that in spades.

It was sunshine and showers over Pikehall, Derbyshire as 25, 000 people descended upon the 11th Y Not festival for the weekend. The sold out event successfully celebrated an eclectic mix of music styles, venues, food and activities all aimed at all ages.

On Thursday, the early birds were treated to an opening line-up of several acts including By the Rivers, Stealing Signs and noughties Indie darlings, Milburn. Merseyside’s The Coral, now 20 years in the game, were still sounding fresh and forceful as they surprised those in attendance with their polished and psychedelic vibes.

Derbyshire’s Babe Punch shook off the cobwebs on Friday, followed by some quality up-and-coming UK acts on the main stage in the form of Kloe and Samm Henshaw. Lancashire Hotpots got a warm reception with their blend of northern humour. R & B Superstar Kelis was a disappointing no-show, with her milkshakes bringing very little to the yard. Ferocious Dog and their hell hounds tore up the Quarry floor, following on from festival troubadour Beans On Toast.

Headliners Editors brought their giant post-punk songs to the Derbyshire countryside. A pounding set, drenched in 80’s synth saw them blast through five albums worth of hits. In sharp contrast to the lad-rock of the main stage, LA’s Deap Vally played an ear-splittingly brilliant set over at the Giant Squid that was one of the highlights of the weekend. Late into the night both DJ Fresh and Craig Charles, with his unmistakable Funk & Soul set, pulled huge crowds to the Quarry stage.

The clouds parted and the sun came out on Saturday as festivalgoers met at the Y -Not sign to do battle with paint bombs. In a maelstrom of multi-colour, those in attendance could be easily spotted walking away covered in pastel splatters. Over on the Big Gin stage early morning TV legend Mr Motivator helped to sweat out some of the hangovers from the night before with his gruelling exercise regime.

The Giant Squid stage was crammed with people desperate to get into the mosh pit of bands like Dinosaur Pile Up, Heck and Wrexam punkers Neck Deep who’s lead singer Ben Barlow crowd surfed amongst a raucous crowd.

Band of the day, and perhaps the festival, was Catfish and the Bottlemen. The Welsh band’s energy, catchy choruses and early noughties sound has made them one of the biggest guitar bands in the country – and rightfully so. After the BRIT award winners, Noel Gallagher’s High Flying Birds pulled a huge crowd who gathered to experience a man who has changed the face of British music for a generation.

Also well met was Indie patriarch Peter Hook and The Light, playing a set covering over twenty years of music and featuring the legendary back catalogues of both Joy Division and New Order. On the same stage, Mike Skinner – from the Streets – played a high-octane DJ set deep into the early hours of Sunday morning.

Sunday began delicately with a surf-guitar freak out to Yorkshire’s The Orielles. Away from the crowds, hay fights and bottles of rum were the order of the day when Theories played the relaxed Tippling House. Tired dancers could stop by the cinema throughout the day to watch the best films of the 80’s and have a sit down.

Fun Lovin’ Criminals and the Hives were in their element on the main stage, but for those who thought it was all a bit hackneyed they could catch a volatile Queen Kwong attack the Giant Squid stage. Newcomers Blossoms were the surprise hit of the festival, drawing a massive crowd that stretched well outside the big-top with new and old fans eager to catch their blissed-out guitar bangers.

Madness closed the festival in style and got the field jumping to their ska-pop tunes. House Of Fun, Our House, Wings of a Dove and bizarrely a cover of AC-DC’s Highway To Hell all showed why the British band have had such longevity. Suggs was joyous throughout and the encore, a rousing singalong to ‘It Must Be Love’, was a fitting end to a laid-back festival.

As the sun set on the 11th Y Not festival, festivalgoers were already setting their sights on next year, speculating on who might be headlining and what new surprises will be in store for them.

Where you there? Check out our gallery below for a taste of the action.