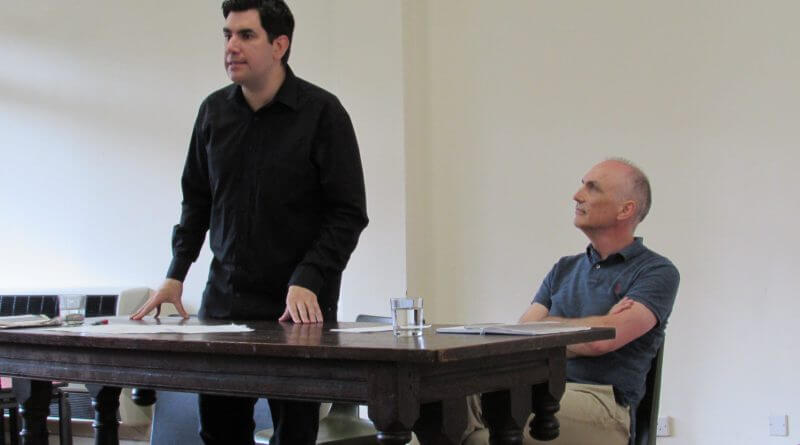 On Saturday there was a 3 hour workshop-based political conference in Derby, organised by the Derbyshire branch of Momentum, the national Labour pressure group leading a campaign in support of Jeremy Corbyn’s leadership. The event was centred around the discussion session with Richard Burgon MP, Shadow Secretary of State for Justice, and had the title of “What’s next for progressive politics?” which served as an overall theme for the conference.

The event began with attendees signing up to one of 3 available workshops, with a fourth being cancelled due to an organiser being unable to attend the event. Each workshop had a general theme to follow in pursuit of framing a question to ask Richard Burgon MP in the concluding hour of the conference.

Let’s take a look at the workshops, the questions raised, and Mr Burgon’s responses to those questions:

Workshop A. was led by ‘Hope, Not Hate’ representative Tom Goodwin and it focused on the #MoreInCommon campaign which emerged following the Murder of Jo Cox MP to combat the rise in anti-immigrant rhetoric and actions in the run up to and immediately following the controversial European Union membership referendum.

The question posed to Mr. Burgon focused on youth involvement in the party and methods of combating “increased acceptability of an anti-immigrant, anti-immigration discourse”

Exerpts from Mr Burgon’s response to this question;
“In terms of increased acceptability of an anti-immigrant, anti-immigration discourse I think it’s very important on the 12th of September last year when Jeremy Corbyn was elected leader, I was there in the QE2 centre opposite parliament when he got elected, and the first place he went was down the road to the ‘Refugees Are Welcome’ demonstration in Trafalgar Square and .. he didn’t do that as a result of a consultation with spin doctors, he didn’t do that as a result of a meeting with a focus group, he did it because it was the right thing to do.”

“We do need to challenge these sentiments because if we don’t people will never change their minds. I do think we have to be careful how we do it because if we’re seen as middle class lecturers of working class people then from my experience what happens is people entrench into their positions because they feel like they’re being under attack, they naturally become more belligerent in their view.”

“I believe that the only way to defeat racism is through class politics, I believe that, I know I know it’s true that racism isn’t natural, no-one is born racist, people learn racism don’t they?  I also think that it’s not surprising that there’s racism in our society, in a vastly unequal and unfair society people are looking for an explanation as to why society is unfair, people are wondering ‘why aren’t there enough houses?’ , ‘why aren’t there enough well paid jobs?’, ‘why can’t my kid get a council house?’ and if the only thing they hear when they ask that question is right wing newspapers and politicians telling them it’s to do with ‘immigrants and foreign people’ of course that’s the explanation that many will accept.”

Workshop B was led by Chrissie Jordan and it was titled ‘A New Economics?’ and focused on the feelings amongst many Labour members of a dramatic shift in the overall attitude towards economics, with opening remarks on the workshop stating that economics can serve a “just society for the greater good”. The group was in an overall consensus on various economic issues such as the domination of ‘neoliberalism’ through privatisation, free trade deals such as SITA and TTIP, and the problematic clash of sovereignty over Investor/State Resolution Clauses in such deals. These measures were implemented to defend private institutions against total seizure of assets by governments but it is feared that due to the vague legal language used in the clause, private institutions could sue governments for loss of profits if government policy or legislation was directly involved.
Another major consensus was on the issue of getting money out of politics, referring to the lobbying and retaining system through which the private sector can pay politicians a retaining fee for the service of representing their interests in office wherever legally possible.

Two questions were posed to Mr Burgon from this group, possibly due to Mr Burgon’s own political experience in economics as a shadow city minister before his current appointment to justice. The two questions were “How can you separate private and corporate money from politics in order to achieve change which benefits everyone?” and “How should be articulate the new direction of economics to the populace?”

Mr Burgon answered these in a single answer

“A great start to Labour’s new economic policy since Jeremy Corbyn was elected as party leader was obviously when John McDonnell gave a speech at the labour party conference last year as shadow chancellor and announced labour as an anti-austerity party and that was a historical announcement, I honestly believe that speech ranks alongside some of the most historically significant speeches in the history of the Labour party”

“For the first time ever just two months ago, a shadow chancellor John McDonnell held a whole day conference on the new economics and I was pleased to take part in that at Birkbeck college, in London. And 800 delegates attended that, there were workshops, speeches and it was made very accessible because one of the dangers is we think economics is for other people, well guess what all these experts, all these top bankers, they’re the ones who made a mess of britain, and a mess of the world back in 2008 so really there should be no deference from us to the defenders of the current economic way of doing things”

“We need to be writing things that are short, sharp and snappy to get across to people out there the truth about the economy.”

…and on the first economic question Mr Burgon added,

“Well Bernie Sanders in the United States has talked about this a great, great deal, we’ve got to understand that big money is the enemy of democracy, that’s the truth, we’ve seen this week that a big donor of the Labour Party has backed the opposition to Jeremy Corbyn calling for them to split to form their own party and even for them to keep the Labour name if they did so. It’s very important that we keep the brand name.”

The focal point of the economic speech was Mr Burgon’s interpretation of how economics affects middle and working class people as he stated his belief that “The years 1945 to 1975 were the golden age of the working class, we built institutions like the NHS” but now “Young people are being told ‘Guess what? You can’t afford it. Guess what you can’t have? A council house.’ And the living standards of working class people are retreating and will continue to retreat unless we bring about change soon”

Workshop C was cancelled but it would have been focused on “Being Active in the Labour Party”, this issue was touched upon briefly by the question presented by Hope Not Hate, but only in the context of youth membership.
The response to this was “I do notice there’s a lot more young people involved in my local Labour party than there used to be” and regarding the issues of membership and the leadership election Mr Burgon remarked that “we’ve got to make sure that the Labour Party is a welcoming place for young people” He also related this in the summarising statement that he gave that it was “An excellent meeting, great to see such a packed meeting on a Saturday afternoon with such a passionate attitude to the issues that affect our lives.”

Workshop D was led by Peter Robinson and focused on the “Climate Coalition and Fracking”
Opposition to Fracking locally has been championed by the Amber Valley Against Fracking group who distributed leaflets promoting their campaign at the event and were an important influence in the workshop.
The question posed to Mr Burgon was “For the last few weeks no-one has talked about the climate, so how do we get the government to stick to environmental commitments and tariffs”

Mr Burgon Stated that “What has been happening to our Earth for profits is … alarming “ he also added that “socialism has to be green” alluding to the pockets of remaining support for fossil fuels amongst the left due to the jobs they often provide” After this short response Mr Burgon deferred judgement on the issue to Chris Williamson, Ex-MP for Derby North who was one of the principal organisers of the event, Mr Williamson then gave his own speech on the environment drawing on his own experience and opinions on the issues of protecting the environment for future generations.

Mr Burgon answered some brief questions on splits within the Labour party to which he advocated for continued membership and unity stating that “The Labour Party has always been a coalition of socialists and social democrats.”