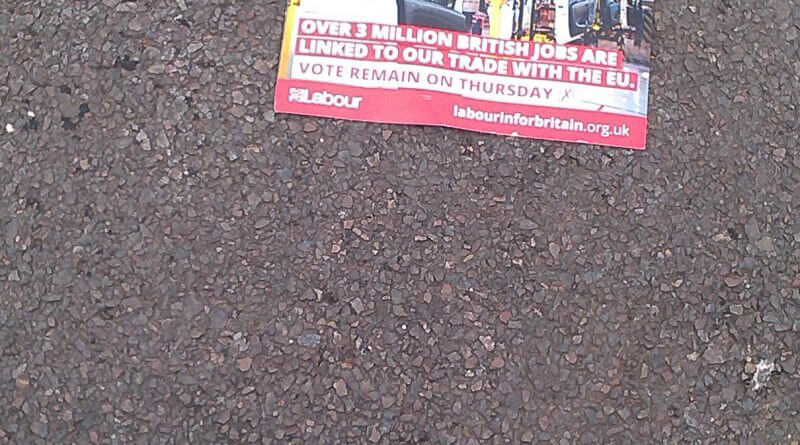 Back in January, having watched Suffragette at the Ritz, I warned of the consequences of disenfranchisement and the potential for people to take drastic action if they felt they were powerless. Little did I imagine it would come in the form of right wing terrorism or nasty, hateful racism.

The referendum result terrifies me. Not because of the potential financial and international relations implications, but in the way the vote was won and the seemingly irreparable chasm-like divide that has opened up in our society.  And this schism has been rendered by lies and innuendo.

Why would anyone trust Boris Johnson? A man who has been sacked twice for lying and who was calmly telling journalists only days later that the financial markets were calm and all was well just as they knew all was crashing down around them. The man can’t open his mouth without lying.

How can we trust a Justice Secretary who implores us to ignore the mountain of expert opinion ranged against the leave campaign? If Gove applied this to the courts we’d have bricklayers rather than doctors giving cause of death evidence. The two-faced nerve of this man is breath-taking  – especially when you consider his wife has appealed for ‘experts’ to help them dig themselves out of the mess they have created.

Who would trust Nigel Farage? A racist bully whose Nazi tendencies were spotted whilst he was still at school. A man who took over a moderate centrist party and allegedly told its founder that former National Front members should be accepted as candidates as “the nig-nogs won’t vote for us anyway”. A man who is on record as saying that if the leave campaign did not get its way then there could be violence. A man who only last week was calling for UK gun laws to be relaxed. Terrifying.

One might expect all decent, honest, intelligent people to reject ‘leave’ because of these three head cases alone. Obviously not, as our very own Pauline Latham seems to have been taken in by all this. Or perhaps she just fell off the fence when the wind blew strong enough.

So why did so many people defy logic and reason and put their faith in a bunch of right wing loonies? I think we can look at two factors – austerity and not having a voice. George Osborne has taken austerity to a new level of deprivation. He has cut benefits, slashed worthwhile programmes, emaciated local government, attacked our health service, given our schools away and then shrugged his shoulders as if there were nothing he could do about it. Enter the world champions at blame deflection: if you can’t get a doctor’s appointment for three weeks it must be someone else’s fault, if you claim benefits you are a worthless scrounger – even if you are disabled and desperately need help. Can’t get a house? Can’t find a place for your little ones in a nearby school? Blame someone else not the government. Blame someone else and believe every word written or uttered by the Sun, the Mail, the Express, Laura Kuenssberg and the rest of the right wing media rabble. Must be the immigrants! Bingo.

“Take back control” is a powerful message and implies we have lost it or never had it in the first place. With the yoke of austerity bearing down on the shoulders of ordinary working families there is a feeling of hopelessness and lack of control. When millions go out to vote in a General Election knowing their vote won’t matter one little bit they know they have no control. It may have been this way for generations. When communities have unwanted plans foisted on them by an anonymous, remote inspector. When unanimous opposition to fracking can be overturned by a government hell bent on destroying our environment and riding roughshod over the wishes of ordinary decent concerned folk. This is when “take back control” has a revolutionary appeal and the pent up frustrations of a people over-rides common sense and logic and decides to give Cameron and Osborne a bloody nose. Ignoring the fact that they are simply handing control to a much nastier part of the same elite.

Our democracy – like a neglected great old building – was smashed to smithereens by the wrecking ball of the referendum and statesman-like leadership is needed to repair it. Someone to take the lead and stamp down on the racist cockroaches that have come out of the woodwork since the vote. Someone to say that dishonesty in politics is not acceptable and move to make telling lies in an election or referendum a criminal offence. Someone to say that everyone’s vote should matter and bring in a system of proportional representation that will see extremism, of whatever colour, moderated for the benefit of all. Someone brave enough to say that local planning decisions are for local communities whilst giving powers to local authorities to buy brownfield land and build houses on it before a single house is built on a green field. Someone who will respect local opposition to fracking and seek a different way of meeting our energy needs.

We need a government that listens to and empowers people, that removes the feeling of helplessness, that accepts responsibility for the consequences of its actions rather than blaming everyone else, that welcomes immigrants who contribute to our wealth and wellbeing and that gives local authorities the powers and resources to cater for all who might want to live in their area.

I fear though, it will be business as usual once the present turmoil is resolved.

3 thoughts on “Fear and Loathing in England and Wales”