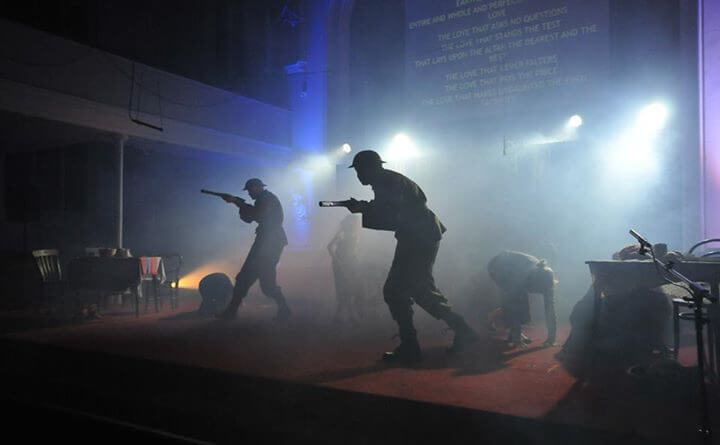 Relatives of Private Walter Pepper who died during the first minutes of the Battle of the Somme will attend a special community commemoration of the Belper men who died on 1 July 1916. John and Jenny Pepper, who live in New Zealand, are visiting Derbyshire specially to remember Walter whose letter, written home on the eve of the battle, is the centre piece of the evenings performances.

The evening performance will feature a new sculpture by Belper artist Andy Mayers. Commissioned by Belper Arts Festival, the sculpture will be constructed during the performance and revealed as the evening closes.

Over 100 people, including children, will be involved in a commemoration of the fourteen men from Belper who died during the first day of the Battle of the Somme. Along with actors, musicians and poets, readers will include Pauline Latham MP, the Mayor of Belper Gary Spendlove, Kath Woodward (Chair of RBL Belper) and Martyn Cooper (Head, Belper School). The Fourteen has been directed by Larry Waller.

“It will be a special evening. The attendance by Walter Pepper’s grandson is an honour. The sculpture is spectacular and I’m specially thrilled with the contributions from local musicians Mat Williams and Craig Morris. The children of Captive Audience Community Theatre are outstanding. Belper Musical Theatre and members of Belper Players bring their usual high quality to “The Fourteen” which is part two of the Belper Community World War One Trilogy,” said George Gunby, the Producer of “The Fourteen”.

“It’s a privilege to work with so many people from Belper who want to give something to the town and to remember the men who died in horrific circumstances,” Mr. Gunby said. “Profits from the evening will go to local charities.”

THE FOURTEEN will be staged in St. Peter’s Church, Chesterfield Road, Belper on Friday 1 July at 7:30pm

Tickets are £5 and are available from OXFAM BOOKS AND MUSIC, Belper,

You can also pay on the door.