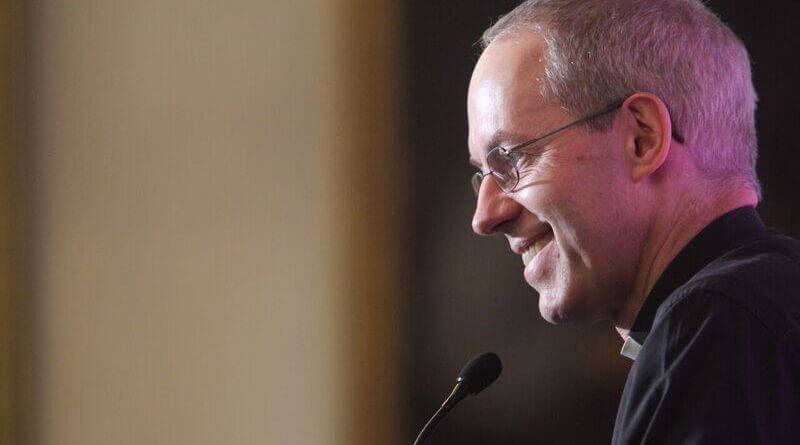 Tomorrow (21st June) the Archbishop of Canterbury Justin Welby begins a three day tour of Derbyshire.  The events take place across the county.

He will speak about his hopes and expectations for the visit at a Civic welcome at The Quad, Derby where he will be joined by council leaders, MPs and mayors from across Derbyshire to witness opportunities and challenges in the Derby Diocese (which covers Derbyshire).  He will be accompanied throughout the three days by the Bishop of Derby, Alastair Redfern.

If you want to see the Archbishop, he will be walking from The Quad to Derby Cathedral at 1.30pm, Tuesday 21 June, when he will meets the public and local businesses en route to the Cathedral.

Following this there will be a debate with 6th formers on ‘British Values: Who are the Real Radicals?’, the Archbishop will then attend an event at The Roundhouse to showcase how Derby College is preparing its learners for the future. After touring the Employer Academies, the Archbishop will present awards to young people in a mini-graduation ceremony, before enjoying a meal prepared by the college’s catering students.

The big public event is ‘Welcoming the Stranger’, which has been organised by the Derby Diocese at The Roundhouse on Tuesday June 21 at 7.15pm. With up to 800 people expected, the event is designed to give the general public the opportunity to worship and engage with the Archbishop, who will then be responding to questions from the floor. Tickets are free, but places must be booked in advance. The Roundhouse event

On Wednesday 22 June, the Archbishop will visit St Peter’s in the City, which is home to a refugee and asylum seekers clinic.  He will meet users of the clinic and hear from the British Red Cross volunteers and Derby City faith leaders on the response to the refugee crisis. He will also view the Refugee and Asylum Seekers Photography exhibition.

The Archbishop will deliver a keynote speech to support Derby Diocese’s aim to encourage closer partnerships at a Social Projects lunch held at St.Barnabas Centre, Danesmoor. As well as meeting networks of Credit Unions, Foodbanks and Citizen Advice Bureaus, the lunch centres on the importance of working in partnership to provide support in areas of high social deprivation. He will have lunch at the Feeding Derbyshire Super Kitchen, the project which uses surplus food from supermarkets to provide affordable meals to the community.

The “regeneration of regional business in a post industrial landscape” will be the theme of the business networking event at St Thomas’s Centre, Brampton. The Archbishop will talk about the challenges facing businesses in the current economic climate followed by a Q&A.

The day ends in Glossop where the Archbishop will join local Vicar Andrew Hargreaves as he camps out for the week in the town’s Norfolk Square. Young people from across the Diocese have been invited to the ‘Jesus on the Square’ event to put their questions to the Archbishop, in a public Q&A taking place at 8.30pm. The evening will culminate with the Archbishop donning waders to carry out full immersion baptisms in a temporary swimming pool in the square at 9pm.

On Thursday 23 June, the Archbishop of Canterbury will be the guest of honour at an event at Derby University aimed to encourage companies across the East Midlands to pledge their support to end modern day slavery. Marking a decade since the creation of the Athens Ethical Principles,  ‘Action 2030: Ending Modern Slavery Together’ invites businesses to sign up to the principles committing them to eradicate human trafficking and slavery throughout their entire supply chain.

Jointly organised by the Diocese of Derby and the International Policing and Justice Institute, Derby University, the event takes place from 10.30-12.30pm and will be hosted by Professor Kevin Brampton.

The Archbishop will address business leaders on exploited workers and humanitarian responsibility and encourage them to become ambassadors against slavery, in support of the work of the Bishop of Derby – a long-time champion of the fight against modern day slavery – who has played a vital role in drafting the Modern Slavery Act 2015.

The role of the church in helping deprived communities is the theme of the visit to St Thomas Church, Pear Tree, Normanton. The Archbishop will hear about the work carried out by the church and key partners to help support the community. Currently undergoing refurbishment funded by Heritage Lottery, the Archbishop will dedicate the new prayer area in the church, which has become a base for much of the vital work being carried out locally by groups including Upbeat Communities (working with refugees and asylum seekers); Roma Community Care (working with economic migrants) and Restore/Your Space (working with trafficking victims and sex workers.

The Archbishop’s visit ends in Swadlincote where he will lead an outdoor worship with primary schoolchildren and plant a tree in the churchyard at St Peter, Hartshorne, to represent the church’s role in caring for the environment and work with the National Forest.

Nailed will be covering much of the visit.

Bishop of Derby, Alastair Redfern said: “We’re delighted to welcome the Archbishop of Canterbury on his first pastoral visit to the East Midlands. It’s a wonderful opportunity to showcase the important work being carried out across Derbyshire as we look to face the challenges together. We hope his visit will inspire many more to get involved in making our communities stronger whether through their church, workplace, social group, school or college.”

The Archbishop carries out two to three pastoral visits to dioceses a year, where he has a chance to witness the mission and ministry going on and to encourage them in their work.