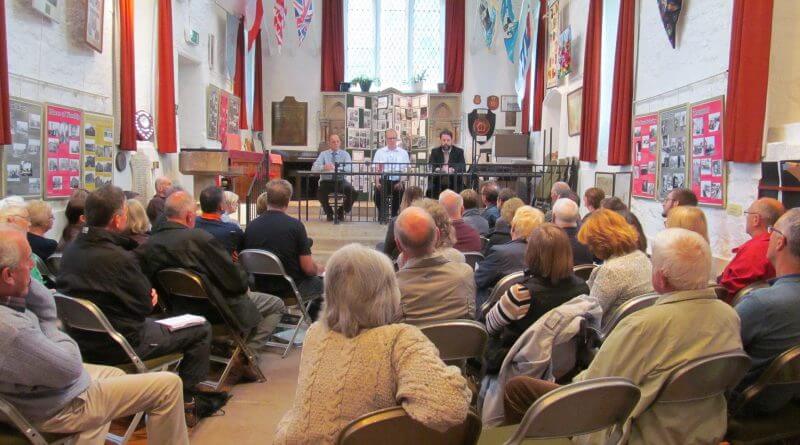 In response to the Planning Application submitted on behalf of JC Balls to build, in ‘Phase 1’, some 201 houses on Green Belt land at Bessalone Hill more than 60 people attended a public open meeting at St John’s Chapel. This was a remarkable attendance given that most Belper people were at work at 10.00 a.m. on a Friday morning.

The meeting was hosted by Cllr Joe Booth and Cllr Ben Bellamy and assisted by Dylan Jones, Amber Valley Borough Council Planning Officer, who answered questions from the floor. He explained that only material planning considerations could be taken into account when looking at objections to the plans. Loss of views or house value, notations on deeds, rights of way and speed limits could not be considered.

According to National Planning guidance Green Belt can only be built on in very special circumstances. This includes small scale buildings in an agricultural or sports field context or individual house changes. Apparently the Government is not encouraging development in Green Belt land and would like to keep it undeveloped. Having said that there have been instances where the Minister has called in schemes refused on Green Belt land and approved them.

The Council will need to give approval to 5,000 houses in the borough. At the moment there is a  2.8 years supply of potential development and the Council has called for more land to be offered up. The Borough have to report the number completed each year to the Dept. of Communities and Local Government (DCLG) but only completions count towards a housing allocation being met.

Joe Booth complained about outline permissions for house building being sat on by developers whilst they wait for more favourable financial conditions. This puts further pressure on planning officers.

Apparently JC Balls do not own the road to the reservoir and have mistakenly claimed in their application that they own the whole site. They have been given three options to rectify this which could result in the application being withdrawn and a fresh one submitted.

World Heritage Site consultants are to visit the site to assess the likely impact on the Outstanding Universal Value of Bessalone Hill in relation to the setting of the World Heritage Site. The Western half of the site from the skyline to Crich Lane is in the DVMWHS Buffer Zone. Although development is possible within the WHS and Buffer Zone it needs to be complimentary to the existing arrangements. As the setting of our WHS is based around the arrested development associated with the industrial revolution this could be an important factor.

Severn Trent Water have, quite naturally, a large number of water pipes across the whole site. It is likely that these would need to be rerouted around the edges of the site. The cost of this, which would be borne by the developer, is likely to be huge as the pipes would need to be buried at a greater depth than the current metre of topsoil that exists before hitting bedrock.  Sustainable urban drainage has to be provided and flash flooding on slopes to be taken into account. Water pipes in the East fields has caused flash flooding to houses on Far Laund although Severn Trent  did sort it out with drainage right up the field. Water and drainage remain a concern.

The meeting heard that Schools and GPs are already full. Also that Hospital Trusts are poor at responding to needs of new developments and  usually nothing happens. The County Council are  better about planning for schools but need to consult with independent academies.

The current application can be dealt with by 13th August by planner but has been ‘called in’ by both Councillors present. If the application is refused it is likely that the developer will appeal a refusal. The options for a planning inspector are then a written response, informal enquiry or a full public enquiry. Dylan Jones thinks the latter option more likely which will take 6-7 months and be completed by March-May 2017 with a decision announced by 2108.

At the end of the meeting there was a call for volunteers to set-up a steering group to fight the plans. From those who remained Sue MacFarlane of the Green Party volunteered to chair the opposition group and the additional support of Protect Belper and Transition Belper was noted. Transition Belper have decided to oppose any development on Green Belt or green field land whilst any brownfield sites – such as Cinderhill – remain undeveloped.

Sue said: “I live very close to this proposed development, and know that the local residents have been concerned that this has been in the pipeline for some time.  At our stall at Belper Goes Green last week, lots of people were talking to us about this proposal, and we were advising them on how to object. I have promised to do whatever I can, including working with other political parties, to ensure that these green fields are not used for building new houses – and I intend to keep that promise.”

If you were not at the meeting because of work commitments you can still join the steering group. Please email Sue: mailto:sue@the-macfarlanes.co.ukor phone her on 01773 423758 to be involved.

You can do this either via the Amber Valley website or in writing to the council.

See: https://nailed.community/2016/06/08/community-joins-together-fight-bessalone-housing-plans/ for ideas of grounds for objection and some of the rules around planning.