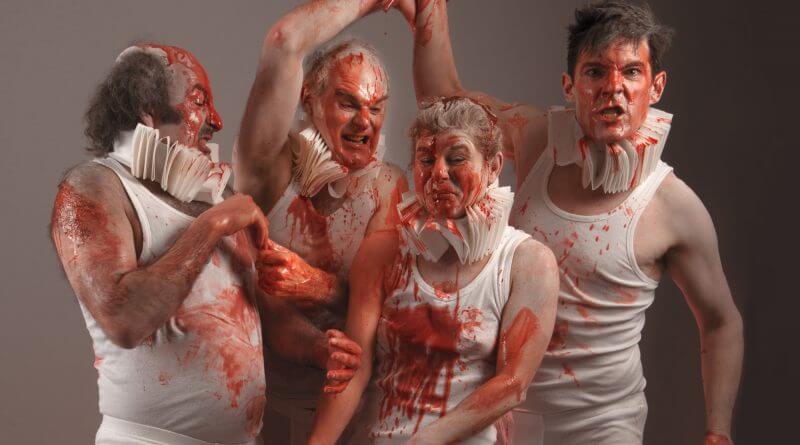 In the bathroom at Derby Theatre I overheard a woman plaintively asking her friend, “But HOW can I explain to people how brilliant this was?  What words will express how hysterically funny it was?”  Her friend had no answer.  I’m not sure I’m going to do it justice either.  Have some awestruck word salad…

The Complete Deaths by Tim Crouch is a comic romp through all 75 of the onstage deaths in Shakespeare’s plays (no really, I am one of the founders of a Shakespeare language site and I thought there were 74 too, we all missed one).  It forms part of the celebrations for the 400th Anniversary of Shakespeare.

It’s difficult to leave Spymonkey without thinking “penis”, which is your warning that this show is for a minimum age of 14.  I took my teenagers (15 and 18) and I have honestly never seen them laugh so much at theatre.

The cast physically attack the audience (no audience members were harmed in this vicious assault on passive viewing). There are bubbles. There’s audience participation.  The audience is never unacknowledged.

I cannot recommend these intellectual clowns enough.  I laughed till my belly ached.

Buttocks, blood, boobs, cross dressing, bondage gear, CODPIECES, willies…all on a wet room set up with a secretarial grim reaper counting down the deaths with a buzzer.

The Complete Deaths analyses how we do theatre, what we expect and whether we should get it. It challenges concepts of high brow theatre and “how Shakespeare is intended” and with a liberal assortment of current cultural and political references, brings Shakespeare back down to its ribald roots.  It examines the way in which we respond to death and what death variedly means to us.  It takes the audience on the metaphorical struggle to carry a corpse without someone tripping one into a bowl of custard while being heckled about a completely different subject.  It’s poignant at exactly the same time that it is funny.  There were several moments where the reactions of the audience were split between hysterical laughter and being moved, as were those of the cast.

It’s smart, it’s daft, it’s chaotic, it’s absurdly well stage managed and just plain absurd.  It is absolutely riotously hilarious.  Spymonkey are only in town for two days and this was one of them, so get there tomorrow because you will regret missing this.  Book here: https://www.derbytheatre.co.uk/complete-deaths