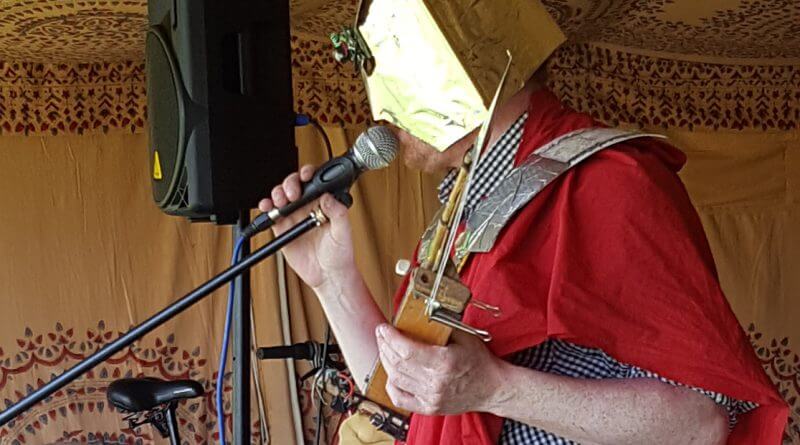 At Belper Goes Green we were lucky to interview part-time gardener and full-time creator of surreal soundscapes, Mr Peter K Rollings AKA Experiment Sonic Machines. Hailing from Lincoln the multi-instrumentalist performed twice over the weekend, hot off his nationwide debut on Britain’s Got Talent.

How would you describe your music to a newcomer?

My music is all original. It’s simple music with strong basslines and rhythms. Often improvised melodies over the top and often improvised lyrics. Each gig is different, so you won’t get the same version of a song repeated. It’s science fiction music. It’s as if a science fiction character was playing music wearing a cosmic overlord outfit.

What got you into music in the first place?

I was really into bands like Joy Division when I was at school. Primitive, simple music, powerful music so you don’t have to be a great musician to play that style. And that set me off coming up with my own basslines thirty years ago, but I found my other friends didn’t like my style so I couldn’t do my music as part of the band. So I got thinking I might have to make machines that would do the role of the bass player and drummer. I came up with things like the cardboard disc player which was just a cardboard disc with holes in it. When 2010 came I thought I was getting a bit old, I was getting into my forties, so I ought to make a start with my music. I launched on the open mic scene and now I really am doing the music I wanted to do.

Given the ethos of the festival, how does your music fit in with what Belper Goes Green is doing?

Playing at an eco-festival is good because that is how a lot of these machines came about. Because being poor and not being able to afford the raw materials straight from the shop meant I would get them free from skips, market crates from the market that they were disposing of, anything people were throwing away as rubbish – if it was something electronic I could re-wire it to be an interesting instrument or dismantle it for parts. So this eco-festival is using solar power which I use as well and recycled materials to make art, I use these to make my costumes and my music.

How does the showmanship of your performance fit with the music?

It comes naturally. Wanting to put the music across in a positive, grandiose way rather than being quiet weak and half-arsed about it. Normally I’m quite a quiet, shy person – people say I’m a meek person – but for a performance you want to be amazing and memorable.

You change into a different and very bold, strutting person during the performance and then revert back to being the sensitive fellow who packs away the equipment afterwards.

Tell us a bit about your Britain’s Got Talent experience?

It was more them coming to me than I going to them. I would not have gone on the show, but they headhunted me. I thought it was a good chance to see what happens, it could go either way. They were very friendly to me and said I gave good interview answers. All the way up to the audition I was expecting them to like me but when I got a negative reaction I was surprised – I just had to take it. I did find positives in it in that I wasn’t buzzed off. I got to play a song and a half. I got more airtime than most people on that show. Quite a big fraction of the audience was on my side, but a fraction was in a jeering mood and that’s what people saw.

And finally, where do you see your music going in the future?

I would like to bring spacecraft into the show, to show the vessels that these characters get around in and the planets they come from. How do you get a planet onto a stage? It’s an interesting concept. Maybe some kind of structure that folds out to show it.