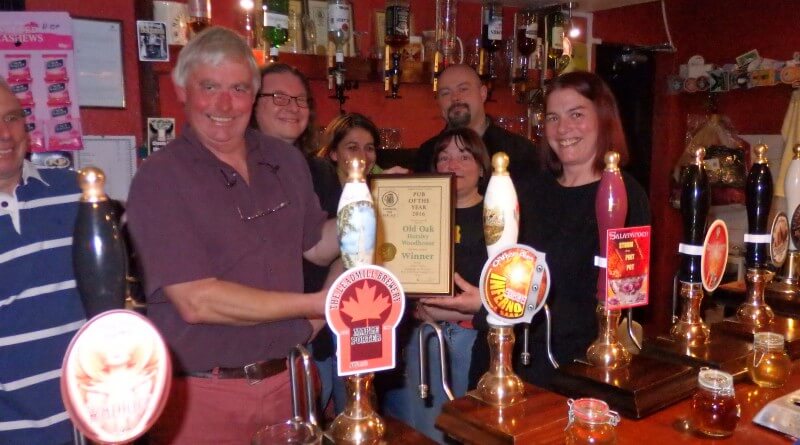 On the evening of April 7th, CAMRA presented certificates to the winner and runner-up in the branch’s Pub of the Year competition and the winner of the Club of the Year.  Starting in the well-deserved pub category winner, The Old Oak at Horsley Woodhouse, a winner at last having been placed 2nd or 3rd several times. Amber Valley CAMRA chair, Chris Rogers awarded the certificate to Tracey and her team.

The group moved on to The Milford Social Club – also known as the Sunshine Club – where CAMRA’s Clubs Officer, Mike Hickman made the presentation to Jeff Kemp using the handy interval provided by TV footie half-time. This club was originally established in 1902 as a members club for the local community. These days annual membership costs £6 for anyone wishing to join.

Finally to round off the evening, the Pub runner up award was presented to Chris Wilbraham at The Holly Bush, Makeney. The Holly Bush was the 2015 winner and also featured in an early April article in the Daily Telegraph written by Michael Henderson in praise of local pubs – to quote just one line “The Holly Bush, Makeney is the English country pub par excellence”.

Here at Nailed HQ we’ll raise a toast to the truly deserving winners and offer our congratulations.

Lead Photo: Chris Rogers presenting the Pub of the Year certificate to Tracey at the Old Oak in Horsley Woodhouse