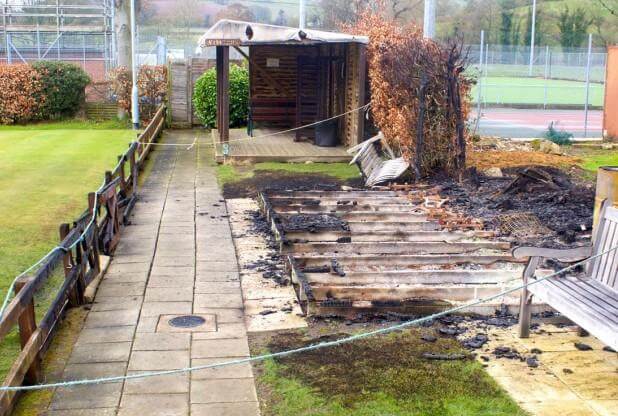 Belper Meadows Bowls Club has been having a tough time of it. For the second time it has been the victim of a deliberate attack.  During the night on 2nd April, one or more people scaled the fences, on Christ Church Meadows, that protect the club and torched one of the stands.  A spokeswoman for Derbyshire Fire and Rescue confirmed that no-one reported the fire whilst it was ablaze and that an investigator had attended after the attack was discovered by the police, but that it had already burnt itself out.

The arson attack destroyed the stand, thirty chairs, six benches and caused about £5000 worth of damage.  The club is uninsured due to its location but a local company has made a “generous donation” to help them to restore the seating for players and spectators.  Fundraising will still be necessary to fully replace what has been lost and a spokesman for the club has stated that the Bowls Club committee will be looking at long term solutions as well.  This is a repeat of an identical arson attack on the club back in 2009.

The club has organised a working party to clear the debris in time for competitive fixtures scheduled to begin this week.

The pavilion, housing refreshments and toilets, was unaffected by the blaze, so the club’s fixtures will go ahead as planned, including their Spring Bank Holiday doubles competition on Monday 30th May, which will be a fund raiser.  Details can be found on their website.

Anyone with information about this incident should contact PC Lee Sadler on 101, quoting incident number 283 of April 2.