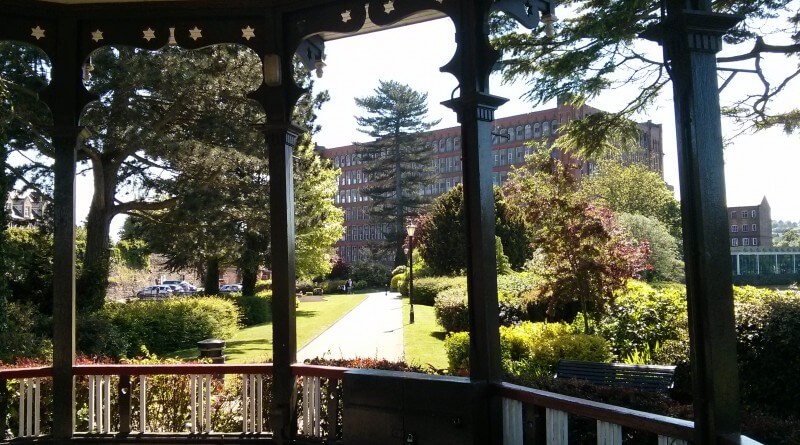 With the Amber Valley Borough Council election a few weeks away, many of the big local issues facing Belper residents will become battlegrounds for the prospective candidates; the state of Belper’s North Mill, the Local Plan and of course, the tearooms in the River Gardens.

On a summer day there can be hundreds of visitors to the River Gardens. No one will deny that the River Gardens are a beautiful space; we use it for dog walking, boating, picnics, well dressings, music, drama, taking our kids to the playground and so much more. The tearooms, however, are not just an eye-sore, they are at best an embarrassment and at worst dangerous.

Last week Ben Bellamy, the Labour Candidate for Belper North in the upcoming Amber Valley Borough Council elections, said that a Labour victory would lead to the situation with the River Gardens Tea Rooms being resolved. He stated that Labour had pledged to fill the funding gap that was holding back the project and laid the blame solely on the Conservative whom “have completely failed to deal with the Tea Rooms for decades.” Adding: “Belper residents and visiting tourists are appalled by this ugly ruin, which spoils our beautiful park.”

Regardless of politics, it is clear that the issue has plagued the town for decades. In 2011 the people of Belper chose a design they wanted to see as the new Swiss tea room out of six shortlisted nominees. The favoured Latham proposal was then rejected by a selection panel who preferred the designs put forward by McNeil Beechey O’Neill. At the time the debate centred around a conflict between the old and the new, with the Latham proposal being described as ‘outdated’ and not ‘commercially viable’ in comparison to the larger, bistro/bar design submitted by MBO.

In the end, nothing was built.

When asked about why the project had stalled Cllr Cox responded by saying: “The Conservatives have always been in favour of replacing the tea rooms. The replacement must fit in with the River Gardens, must be affordable and must be financially sustainable. The plans that were approved fitted all these criteria. However following the collapse of the economy the design proved to be unaffordable.”

Have any lessons been learnt since then? Well, things do seem to be tentatively heading in the right direction. Last year Belper Town Council resolved to ring-fence £100,000 of funding towards a replacement building to assist in moving the stalled project forward. In February it was then announced that the Belper Tearooms Association had been established to secure a much needed replacement for the derelict site in Belper’s River Gardens. The BTA, formed from members of the Friends of Belper River Gardens, is working in partnership with AVBC to provide and manage a lower cost replacement for the tearooms. Last week it was also announced that AVBC, at its meeting on 23rd of March 2016, had approved the capital budget for 2016/17 which includes a further £100,000 for the tearooms.

The sceptical side of me, the sceptic of party politics and electioneering, is inclined to think we may be waiting another five years before anything happens. A temporary suggestion, why not clear the site and have a rotating selection of pop-up eateries. Each time they rent the location some of the fee goes towards the building of the new tearooms.

Whether the vote in May leans towards red or blue – other parties are, apparently, available – it is long past time for some joined up cross-party thinking to finally get this project off the ground. We’re the town that organises one of the biggest food festivals in the area, surely we are capable of providing something at the River Gardens, even if it is just until the day ground is finally broken on the new tearooms.

8 thoughts on “Editorial: A Tale Of Two Tea Rooms”