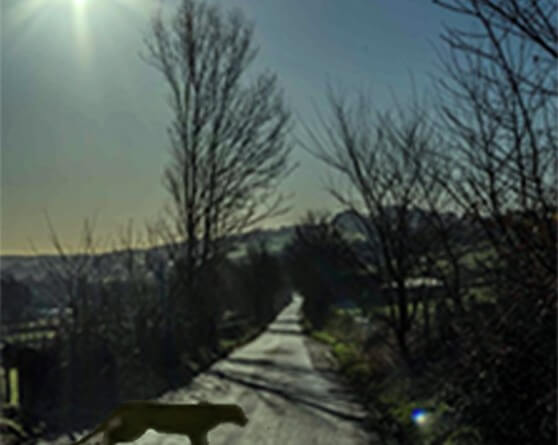 A local resident out walking his dog early this morning has spotted a large creature with a “very long tail.”

Mick Windbridge, from Long Row Belper, was taking his Cocker Spaniel ‘Tipper’ out for his usual morning walk on Dalley Lane when he spotted the creature several hundred metres up the road.

Windbridge, a prominent fly fisher, said: “Tipper noticed it first, he was incredibly jumpy and didn’t want to go in that direction. It was seconds later I spotted what had spooked him.”

Over the past three years sightings of large cats have increased tenfold in the Belper area. Some are believed to be Maine Coon cats who escaped into the wild back in September 2015, but others, such as the image taken by Mr Windridge could be more exotic.

Up until the 1960s and 1970s it was legal to keep exotic animals as pets in the UK, including leopards, pumas and panthers.

This ceased when the Dangerous Wild Animals Act was introduced in 1976. Most owners gave their animals up to local zoos or wildlife parks, but a minority, worried for their pets safety, released them into the wild.

When asked to describe what he saw he said: “It was a clear morning and it was definitely not any sort of cat I have seen….it’s tail was too long for that. I couldn’t see any markings either, so the first thought I had was that it must have been a panther or the like.”

He added: “It was very strange, took a quick photograph on my phone but something must have scared it off. It moved quickly towards the hedgerows, and it moved fast, that I can tell you.”

Mr Windbridge immediately called the police to record the event fearing other dog walkers and drivers may be at risk. They advised walkers to stay clear if they witness any similar events.

Concerned residents are being asked to stay indoors and find the largest dog available to hide behind.

3 thoughts on “‘Possible Panther’ Spotted On Outskirts Of Belper”